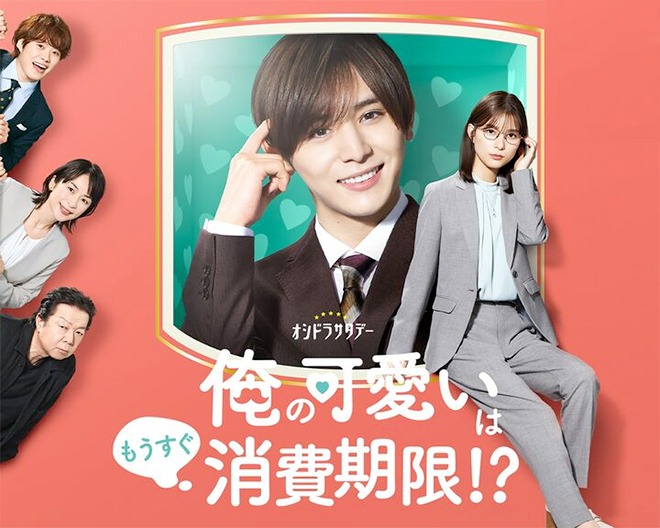 Synopsis
29-year-old Maruya Kosuke, who works for Yayoi Beer’s sales department, is basking in the flashlights of cameras on stage at an event to introduce a new beer. Since he was a child, Kosuke has been popular with people due to his charming features and friendly personality. In his studies, work as well as romance, he would get 120% in return for whatever he desires. Even at this event, Kosuke outshines the celebrity. He gets a media interview request and hurriedly rushes into a lift. As soon as a middle-aged man inside the lift sees Kosuke’s face, he grasps the terrified young man’s cheeks and exclaims that he is utterly cute. But a moment later, the man mutters that this life is about to end soon and leaves with a sad and pained expression. The next morning, Kosuke’s boss Yamura Tsukasa introduces him to Sanada Izumi and Ichinose Kei who have transferred to the department. Kosuke becomes Izumi’s mentor and tries to capture the heart of this expressionless, curt and reticent young woman with his usual smile. Unfortunately, it has no effect on Izumi. After that Kosuke brings the two of them to call on a client. However, Ichinose makes a regrettable mistake. Kosuke follows through with his trademark killer smile without missing a beat. Several days later, there is a shocking request from the client. A shaken Kosuke contacts his girlfriend Moriyasu Riko to soothe his agitation, only to be dealt another blow. Something is strange. Kosuke’s life has suddenly started to go awry while the middle-aged man stealthily watches him. Before this, everything used to go well once he unleashed his smile. Now his life is slowly going downhill from its prime. Could his cuteness have a use-by date?

Characters
Yamada Ryosuke as Maruya Kosuke
A regular employee at Yayoi Beer’s sales department. The eldest son of a wealthy family that runs a sake brewery of long standing, he has an easygoing and likeable personality. Furthermore, he has been popular since young due to his cute looks and always led life as the main character. With cuteness as his greatest asset, he is at the top of his game at work and has never had a problem having a girlfriend. He has not questioned the life he has had these 29 years until he starts facing difficulties in both work and romance and is confronted with something shocking. That is, his cuteness has a use-by date.

Yoshine Kyoko as Sanada Izumi
A regular employee at Yayoi Beer. She considers herself to be a secondary character in life as a result of a childhood experience. She has always liked to live in her own fantasy world. After graduating from university, she got a product development job where she would not have to interact with many people. However, she gets transferred to the sales department of all places and ends up being paired with Maruya Kosuke. She has stayed away from romance with the stubborn thought that she will never be chosen by someone and Kosuke’s killer smile has no effect on her.

Ohashi Kazuya as Ichinose Kei
A regular employee at Yayoi Beer. He has been with the company for three years and joined at the same time as Sanada Izumi. He respects Maruya Kosuke. Well-regarded for his work, he was nominated and transferred from the Kansai branch to the sales department. He is friendly, straightforward and sincere in his work. He unwittingly ends up threatening Maruya Kosuke’s position.

Sayashi Riho as Moriyasu Riko
The most popular receptionist at Yayoi Beer and the girlfriend of the popular Maruya Kosuke. His cute visuals are her weakness. The two of them have been dating for a year but … …

Nishida Naomi as Yamamuro Tsukasa
The head of Yayoi Beer’s sales department and the boss of Maruya Kosuke. She also faced the expiration of her own cuteness in the past. And no matter how capable she is at her job, it seems people speak behind her back that she was elevated into this position because she is a woman. She appoints Kosuke to be Sanada Izumi’s mentor and instructs the two of them to take charge of a new client.

Furuta Arata as Ossan
An elusive middle-aged man who appears in front of Maruya Kosuke at random. He is excited and agonised by Kosuke’s cuteness. But from time to time he would mutter profound words with a sad and pained expression on his face. He is a man of many mysteries who shadows Kosuke for some reason and makes him feel uneasy.

This blog contains information and musings on current and upcoming Japanese dramas but is not intended to be comprehensive.
View all posts by jadefrost →
This entry was posted in Spring 2022 Dramas, TV Asahi and tagged Furuta Arata, Nishida Naomi, Ore no Kawaii wa Mousugu Shouhi Kigen?!, Yoshine Kyoko. Bookmark the permalink.