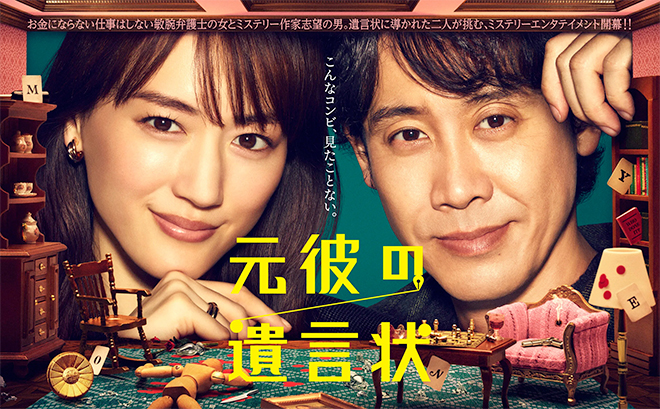 Synopsis
Kenmochi Reiko specialises in corporate law and works for one of the country’s top law firms. She is so obsessed with winning and capable of doing anything for the benefit of her clients, that she has made many enemies. However, she does not care how she is perceived by the people around her. She merely boasts that she is honest about her desire for money. One day, Reiko’s bonus gets cut by Tsutsui Kimihiko, the head of the firm, after she loses an important client. Feeling indignant about the way she has been treated, Reiko blusters that she is going to quit and takes a brief leave of absence. With time to spare, she sends emails at random to acquaintances to find drinking partners. The only person who replies is an ex-boyfriend Morikawa Eiji whom she had only dated for six months when they were in university. But the email response contains shocking news of his death. The sender is a mysterious man called Shinoda Keitaro who greets Reiko in an overly familiar manner when they meet in person even though they are not acquainted. Shinoda seems to be Eiji’s senior in a university club and also invited by Eiji to be the manager of a Karuizawa villa where Eiji was recuperating. He was also the first person who found Eiji dead in his own room. What is even more surprising is Eiji’s strange will that bequeaths his huge fortune to the person who killed him. Shinoda proposes that Reiko set him up as the “murderer” after she becomes his attorney … …

Characters
Ayase Haruka as Kenmochi Reiko
An outstanding lawyer whose overwhelming knowledge and eloquence are her assets. She works for the major law firm Yamada Kawamura Tsutsui. She is so obsessed with winning that she does not follow unspoken orders and has made enemies inside and outside of the law firm. She has a dispute with a client and ends up suspended from office. Her desire for money is stronger than others and when she learns about the death of an ex-boyfriend Morikawa Eiji, she conspires with Shinoda Keitaro and concocts a plan to get her hands on his vast fortune.

Oizumi Yo as Shinoda Keitaro
A mysterious client who proposes to Kenmochi Reiko that they divide Morikawa Eiji’s fortune equally. He found Eiji’s dead body and contacted Reiko. He was Eiji’s senior in a university club and took care of Eiji who was prone to illness and let him live in the villa as caretaker. He is mild-mannered and has a stylish appearance. He loves mystery novels and wants to be a mystery writer.

Ikuta Toma as Morikawa Eiji/Morikawa Tomiharu
While the twin brothers look alike, they are complete opposites in character. Eiji is sociable, friendly and very popular with females while Tomiharu is an introvert and inscrutable. Tomiharu is the eldest son of Morikawa Kaneharu but he never had any ambition of inheriting the company and is currently teaching anthropology as a university associate professor. The unusually selfless Tomiharu refused their grandmother’s estate and let Eiji inherit it. He has such a weak presence that belittles himself as a “ghost” and tries not to interact with people very much. When Kaneharu and aunt Mariko are unable to comprehend the meaning of Eiji’s will and get worked up, he is the only calm person. “Eiji will turn in his grave. Even if I tell you the meaning of his will, people like you will not be able to understand. Isn’t that why Eiji didn’t write the meaning.” Kenmochi Reiko and Shinoda Keitaro get suspicious and start questioning the people around him. The strange fate that links the two brothers is gradually revealed.

Sekimizu Nagisa as Morikawa Sae
Morikawa Eiji’s cousin who is honest with her own feelings and will verbalise and act on what she thinks. She mercilessly lashes out at his ex-girlfriend Kenmochi Reiko due to jealousy and she hates to lose. The lone person grieving over Eiji’s sudden death, she proclaims herself to be the only one who is innocent and roundly criticises the unfeeling and calculative Morikawa family. She was never loved by Eiji and seems to have a motive to be involved in his death.

Manda Hisako as Morikawa Mariko
Morikawa Eiji’s aunt and the managing director of Morikawa Pharmaceutical. There is a power struggle between her and her brother Kaneharu and they are on bad terms. Her faction has been working on the development of a new painkiller and aim to launch it the year after next. This will be a big accomplishment for her but Kaneharu tries to interfere and prevent it from going on sale.

Kaname Jun as Morikawa Takumi
Morikawa Eiji’s cousin who has designs on Morikawa Pharmaceutical. He is impatient, arrogant and verbally abusive to the people around him. Although he is central to the efforts to develop a new drug, he is seen as an enemy by the CEO Morikawa Kaneharu since he stands to benefit if Eiji is no longer around. He is furious that Kaneharu treats him as the murderer and intimidates the people around him by acting rather unhinged.

Fueki Yuko as Morikawa Yukino
Morikawa Takumi’s wife and Morikawa Eiji’s former girlfriend. She has a bewitching air and mesmerises men including the lawyer Maruyama Genta. Morikawa Sae is envious and relentlessly snaps at her. But she totally ignores her. After Eiji fell sick, she dated his older cousin Takumi and they later got married. She is like the rose which has concealed thorns … …

Satoi Kenta as Morikawa Kaneharu
Morikawa Eiji’s father and the CEO of Morikawa Pharmaceutical. He is angry that Eiji would bequeath his fortune to a stranger. He worries about the “criminal” who will become a big shareholder in the company and whether the person will be to his benefit. There is a gradual glimpse of the coldness of a father who does not mourn his son’s death.

Sasano Takashi as Maruyama Genta
The family lawyer who was entrusted a strange will by Morikawa Eiji and is struggling at the centre of an ugly inheritance battle. He intends to retire once this issue is resolved and he has great faith and expectations of Kenmochi Reiko. A female lawyer friend died in the past and he worries about the fearless Reiko. The two of them are polar opposites but they form a connection and begin to establish a relationship of trust.

Mori Kanna as Haraguchi Asahi
A nurse who was Morikawa Eiji’s ex-girlfriend. She took care of the sickly Eiji when he was alive and they became lovers over the course of the time spent together. She is shy, timid and looks like a person of integrity but seems to know something connected to Eiji’s death.

This blog contains information and musings on current and upcoming Japanese dramas but is not intended to be comprehensive.
View all posts by jadefrost →
This entry was posted in Fuji TV, Spring 2022 Dramas and tagged Ayase Haruka, Ikuta Toma, Motokare no Yuigonjou, Oizumi Yo. Bookmark the permalink.