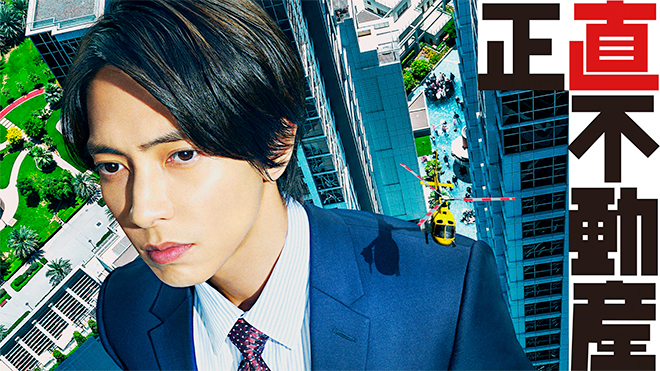 Synopsis
Property agent Nagase Saichi boasts the top sales at Tosaka Real Estate due to his eloquence and competence. He has stayed the number one salesman for his willingness to lie in sales pitches. The destruction of a small shrine at the construction site for an apartment building one day results in sudden divine punishment that makes him unable to tell lies. As he rattles on about things he does not need to say, clients naturally get enraged and this ends up undermining a string of contracts that were close to being signed. Nagase’s top spot is quickly taken over by Kiriyama Takahisa, a junior in the same company. While the two of them fight over clients, newbie Tsukishita Sakura struggles to seal her first contract despite her philosophy of putting clients first. Meanwhile, Kiriyama asks Nagase to switch a client he is in charge of. Wanting to improve his sales performance, Nagase readily agrees but the property in question has hidden problems relating to rent. How will Nagase be able to survive in the cutthroat real estate industry where sales techniques counts for everything, now that he is a property agent with honesty as his only weapon?

Characters
Yamashita Tomohisa as Nagase Saichi
He had been a top property agent at Tosaka Real Estate for a long time until a divine punishment suddenly renders him unable to tell lies. Since he is only able to say what he truly thinks, he has a hard time negotiating with clients.

Fukuhara Haruka as Tsukishita Sakura
A new employee who has recently joined Tosaka Real Estate. Her motto is to put customers’ first and she has high aspirations. With Nagase Saichi assigned to be her mentor, they end up cooperating and striving hard for the sake of their clients.

Ichihara Hayato as Kiriyama Takahisa
A junior colleague at Tosaka Real Estate who always sees Nagase Saichi as his rival. Beneath his cool facade, he is full of fighting spirit. He privately has misgivings about Nagase Saichi whose sales performance has dropped.

Izumi Rika as Enomoto Minami
A loan officer at Tosaka Real Estate’s financing bank. She has high expectations of her marriage partner and has not had much luck in her relationships. But she meets Nagase Saichi and begins to take aim at him … …

Takahashi Katsunori as Ikaruga Masato
The CEO of Tosaka Real Estate’s competitor, Minerva Real Estate. He is willing to do unscrupulous things in order to put Tosaka Real Estate out of business. This is connected to something that happened decades ago during the bubble economy.

Kusakari Masao as Tosaka Juro
The CEO of Tosaka Real Estate who watches over his employees sternly and warmly. His words to them always cut straight to the point and carry a lot of weight.

Theme Song
so far so good by Oda Kazumasa

This blog contains information and musings on current and upcoming Japanese dramas but is not intended to be comprehensive.
View all posts by jadefrost →
This entry was posted in NHK, Spring 2022 Dramas and tagged Kurashina Kana, Kusakari Masao, Nemoto Nonji, Shoujiki Fudousan, Takahashi Katsunori. Bookmark the permalink.