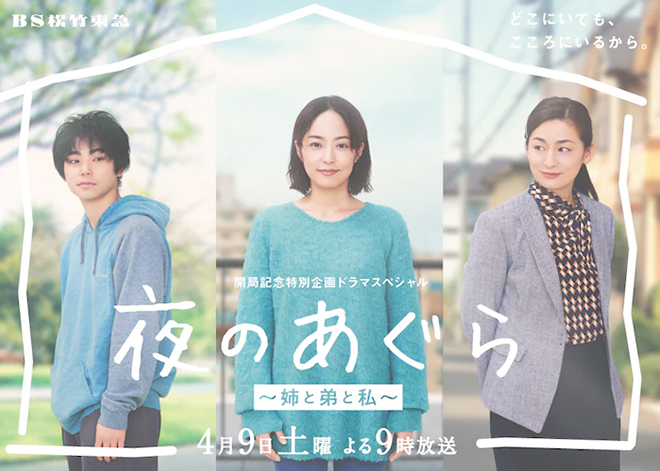 Date: From 9.00 p.m., 9 April 2022
Original Work: Yoru no Agura by Nagashima Yu
Scriptwriter: Nojiri Katsumi (Kinou Nani Tabeta?)
Director: Nojiri Katsumi
Cast: Inoue Mao, Ono Machiko, Murakami Nijiro, Tezuka Satomi, Minami Kaho, Kishibe Ittoku
Synopsis: Akiko (Inoue Mao) quit being a piano teacher and has been spending her days aimlessly without setting any goals for herself. One night on New Year’s Eve, she and her younger reclusive brother Yukio (Murakami Nijiro) are summoned by their older sister Haruko (Ono Machiko) to an urgent meeting because their father (Kishibe Ittoku) is dying. Haruko proposes that they join hands and fight against his mistress Midori (Minami Kaho) in order to protect his assets from her. Despite Akiko’s reluctance, she gets dragged into it by Haruko and has to scurry about. However, she gradually comes to know a different side to her two siblings that she had never realised. They eventually end up sneaking into the family home in the middle of the night to steal the safe … …
Official Website: www.shochiku-tokyu.co.jp/program/2071
Twitter: twitter.com/BS260_official

This blog contains information and musings on current and upcoming Japanese dramas but is not intended to be comprehensive.
View all posts by jadefrost →
This entry was posted in Spring 2022 Drama Specials and tagged Inoue Mao, Kishibe Ittoku, Minami Kaho, Murakami Nijiro, Ono Machiko, Tezuka Satomi, Yoru no Agura. Bookmark the permalink.