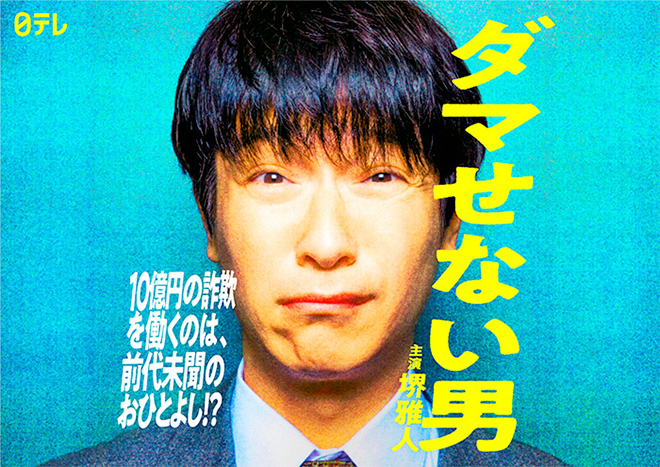 Date: From 9.00 p.m., 26 March 2022
Scriptwriter: Mori Hayashi (Momo Ume, Channel wa Sono mama!, Himo Men)
Director: Mizuno Itaru
Cast: Sakai Masato, Kadowaki Mugi, Murakawa Eri, Minagawa Sarutoki, Kote Shinya, Okabe Takashi, Toyama Toshiya, Mitsuishi Ken, Hirosue Ryoko, Namase Katsuhisa
Synopsis: Kinusaki Tadashi (Sakai Masato) is an ordinary and very well-meaning salaryman. He meets Asaka Mio (Kadowaki Mugi) at a matchmaking party. She asks Tadashi to go and meet her father. However, the man whom Tadashi meets is Kijima Genichiro (Namase Katsuhisa), the CEO of a major construction company. Mio is actually a fraudster who goes by the nickname Fragrance no Mio. She attempted to swindle 500 million yen out of Kijima but failed and is now under his control. Kijima tells Tadashi and Mio that he will let them off if she manages to steal 1 billion yen from Omori Utako (Hirosue Ryoko), the CEO of Grand Forest Resort. Should they fail to pull it off, he will kill them. Tadashi has unwittingly been made an accomplice and embroiled in a scheme. Mio lays out a plan to get 1 billion yen from Omori but this is terribly unacceptable for Tadashi. He cannot tell lies or do bad things and ends up becoming a fraudster who can never deceive people. However, Tadashi’s goodness causes this scheme to hurtle in an unexpected direction.
Official Website: www.ntv.co.jp/damasenaiotoko
Twitter: twitter.com/ntvdrama

This blog contains information and musings on current and upcoming Japanese dramas but is not intended to be comprehensive.
View all posts by jadefrost →
This entry was posted in NTV, Spring 2022 Drama Specials and tagged Damasenai Otoko, Hirosue Ryoko, Kadowaki Mugi, Mitsuishi Ken, Namase Katsuhisa, Sakai Masato. Bookmark the permalink.