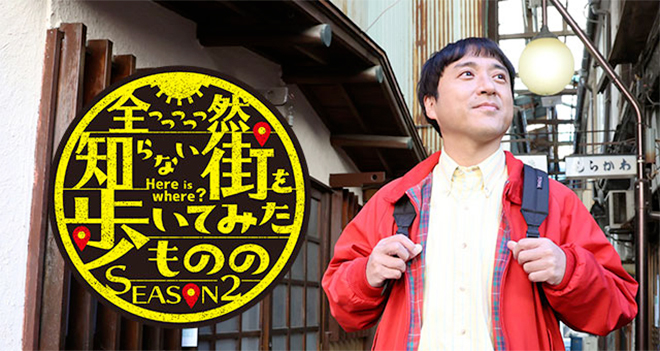 Minami Gyotoku
Synopsis: Manga artist Seino Toru (Muro Tsuyoshi), who lives in Tokyo’s Akabane district, realises that the world is full of towns with unfamiliar names and gets an idea. Not wanting to die without knowing the sights, people and stories that can be found in these places, he heads for Minami Gyotoku station in Chiba Prefecture. Even though he alighted at the station, he notices that many shops have capitalised on the popularity of France with French words and Okinawan cuisine is served at an okonomiyaki shop … … This is clearly a town that has its own character. At a cafe and bar full with male customers, Seino encounters a man named Harada (Katsuji Ryo). Harada is a popular influencer and that arouses strong feelings of jealousy in Seino.
Cast: Muro Tsuyoshi, Katsuji Ryo, Sylvia Grab, Ito Shuko, Abe Ryohei, Nakamura Riho, Shiina Narumi, Yudetamago Yasui

Daikanyama
Synopsis: Seino (Muro Tsuyoshi) arrives in Daikanyama in Shibuya dressed in his only good suit. He feels self conscious in this district lined with fashionable shops and smartly dressed people. However, he musters the courage and heads into a hair salon that is his destination. Despite feeling bewildered by the intimidating atmosphere and procedure which is different from what he is used to at his Akabane barbershop, the careful treatment and pleasant hairstylist puts Seino at ease and he begins to relax. After getting a stylish haircut, he walks around town in high spirits.
Cast: Muro Tsuyoshi, Katsuji Ryo, Jona Gold, Nunokawa Hiroki, Michio, Izuka Kenta, Saiki Shigeru

Horikiri
Synopsis: Seino (Muro Tsuyoshi) alights at Horikiri station in Adachi ward. Its streets are known as the location where the drama 3-nen B-kumi Kinpachi Sensei was filmed and local residents also bring up the topic of Kinpachi Sensei at every opportunity. Seino is captivated by Iida Tsukasa (Morikawa Aoi) who sells sandwiches from her food truck in front of a park. He thinks that she is the person of his destiny when he encounters her again and again even after this. As Seino enters a curry shop while fantasising about a future with Tsukasa, the influencer Harada (Katsuji Ryo) appears. Bitter that Harada is live-streaming on Instagram, Seino comes up with a strategy to retaliate.
Cast: Muro Tsuyoshi, Morikawa Aoi, Suzuki Masayuki, Nishio Mari, Nishino Nagisa, Nagano Munenori

Tateishi
Synopsis: Seino (Muro Tsuyoshi) comes to Tateishi in Katsushika ward. It is famous as the town for very cheap drinking places where a person can get drunk with just 1,000 yen. There is a signboard connected to the manga Captain Tsubasa in front of the station. When he checks out the rundown alley Nonbe Yokocho which has tiny watering holes, none of the joints are open. It seems that that it is about to be cleaned up as part of Tateishi’s redevelopment. Seino wanders into an udon shop and gets excited about being able to drink. He enjoys himself with draft beer and side dishes in the afternoon … …
Cast: Muro Tsuyoshi, Yanagisawa Shingo, Saito Shota, Saito Keita, Akaboshi Shoichiro, Yamauchi Yuka

Tateishi
Synopsis: To explore the charms of Tateishi at night, Seino (Muro Tsuyoshi) heads for 100 yen deep-fried food skewers which had been recommended by a man called Robert (Mizutani Atsushi). A serious and inflexible owner runs the stall and there is an advisory note with the Japanese character that says “fixed”. Seino instinctively asks for hot sake instead of draft beer and eats the skewers with relish. Then he realises that the owner is pouring sake for him – a gesture which astonishes even the regulars. Seino is drinking it in a good mood when Robert appears. He says Tateishi’s nights are short and invites him to the next joint.
Cast: Muro Tsuyoshi, Yanagisawa Shingo, Mizutani Atsushi, Saito Shota, Saito Keita, LiLiCo

Joshidai, Chuugakkou
Synopsis: Seino (Muro Tsuyoshi) gets on the Yukarigaoka line which runs in Sakura City, Chiba Prefecture and arrives at Joshidai station. A young lady Megumi (Miyama Karen), who was on board the same train carriage, drops the burdock that she had been carrying and leaves. Seino goes after her but is obstructed by the ticket gate and loses sight of her. Although he alighted at the station, there does not seem to be anything around the area. He thinks about dropping by Joshidai’s school cafeteria but is told by a man waiting for the bus that there is none. Seino walks the distance of one train station to a park in a residential neighbourhood. He meets a crying Megumi there.
Cast: Muro Tsuyoshi, Miyama Karen, Irie Masato, Honda Chikara, Yoshikawa Masahiro

This blog contains information and musings on current and upcoming Japanese dramas but is not intended to be comprehensive.
View all posts by jadefrost →
This entry was posted in Fuji TV, Spring 2022 Drama Specials and tagged Zenzzzen Shiranai Machi o Aruite Mita Mono no Series. Bookmark the permalink.