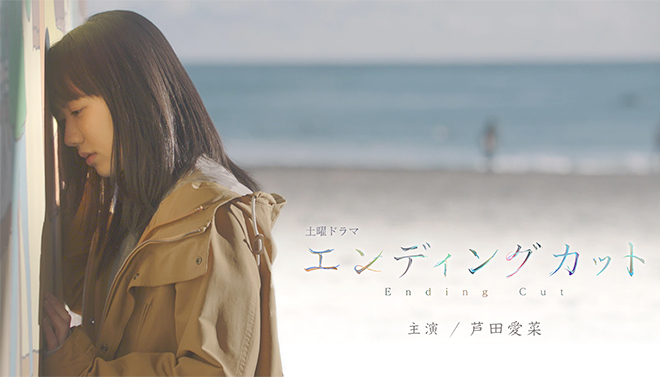 Date: From 9.00 p.m., 19 March 2022
Original Work: Ending Cut by Arai Masami
Scriptwriter: Oike Yoko
Director: Hara Eisuke
Cast: Ashida Mana, Sato Ryuta, Hirosue Ryoko, Maiko, Ikezu Shoko, Tabata Shima, Tamaoki Reo, Suzuki Sotaro, Tsurumi Shingo
Synopsis: Sakoda Yui (Ashida Mana), a cheerful and positive third year high school student, lives in a seaside town. She is the only daughter of a couple who are hairstylists and run a small hair salon. Yui has loved painting pictures since she was a child. She aspires to get into art college and has been attending a course at Atelier Koha in the town. The entrance examination for selected candidates who have been recommended to the college is just round the corner. Yui completed a painting over the summer but Nasu Kaoru (Maiko), her instructor at Atelier Koha, points out that something is missing. As Yui broods over what she might be lacking, she identifies one concern. Lately her father Kazutoshi (Sato Ryuta) has been behaving strangely. He would leave everything at the salon to her mother Nanami (Hirosue Ryoko) and keep going on home visits to do haircuts. One day while Yui is heading for her course at Atelier Koha, she sees Kazutoshi get into a car dressed in mourning attire. Growing suspicious, she tails him but arrives at a funeral home. This is how Yui finds out from her father that he began a job doing the “ending cut”, which are hair cuts for the deceased who have been placed in coffins.
Official Website:www.nhk.jp/p/ts/G9482ZNQLV

This blog contains information and musings on current and upcoming Japanese dramas but is not intended to be comprehensive.
View all posts by jadefrost →
This entry was posted in NHK, Spring 2022 Drama Specials and tagged Ashida Mana, Ending Cut, Hirosue Ryoko, Tsurumi Shingo. Bookmark the permalink.