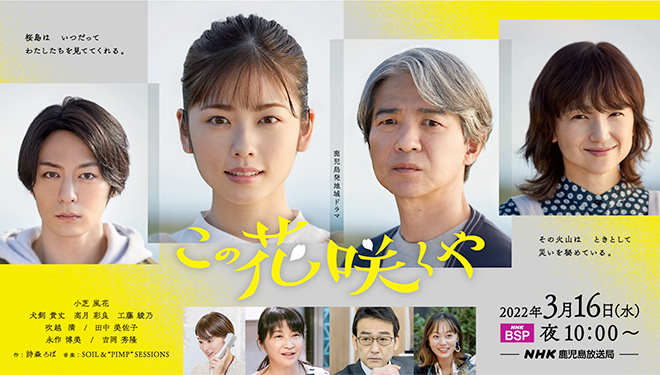 Date: From 10.00 p.m., 16 March 2022
Scriptwriter: Shimori Roba
Director: Kojima Toyo
Cast: Koshiba Fuka, Inukai Atsuhiro, Takatsuki Sara, Kudo Ayano, Tanaka Misako, Fukikoshi Mitsuru, Nagasaku Hiromi, Yoshioka Hidetaka
Synopsis: Sakamoto Chika (Koshiba Fuka) lives in Kagoshima City, situated next to Sakurajima, the prefecture’s symbol which continues to shoot plumes of volcanic ash into the sky. She works under Hirata Takashi (Fukikoshi Mitsuru) at Kusunoki Real Estate. Both her job and romance are not going so well. Chika has shown little growth at work and has not been able to respond to her boyfriend’s proposal because she does not have the courage to take a step forward. One day, a man called Tsumura Kojiro (Yoshioka Hidetaka) comes to Kusunoki Real Estate in search of an apartment. He says he is a complete stranger to Kagoshima. An enthusiastic Chika introduces him to an apartment with a view of Sakurajima which she highly recommends. However, when Tsumura is given a private viewing, he suddenly declares that he wants a house where he cannot see Sakurajima. His unexpected words sets in motion a search for happiness.
Official Website:www.nhk.or.jp/kagoshima/konohanasakuya
Twitter: twitter.com/nhk_kagoshima

This blog contains information and musings on current and upcoming Japanese dramas but is not intended to be comprehensive.
View all posts by jadefrost →
This entry was posted in NHK, Spring 2022 Drama Specials and tagged Fukikoshi Mitsuru, Inukai Atsuhiro, Konohana Sakuya, Koshiba Fuka, Nagasaku Hiromi, Yoshioka Hidetaka. Bookmark the permalink.