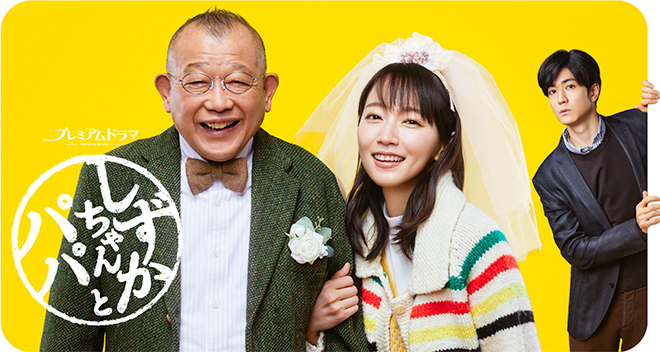 Synopsis
28-year-old Nonomura Shizuka lives with her father Junsuke who runs a photography studio at a shopping street in the countryside. Junsuke was born with a hearing impairment. Her mother also suffered the same condition but passed away when Shizuka was very young. Unlike her parents, Shizuka is able to hear and has been her father’s ears and mouth from an early age. That is why she has a habit of staring at other people and gesturing while she speaks since visual cues are important in conversations with him. However, this habit of hers is misconstrued as flirtation or inconsideration. Her colleagues at the family restaurant where she works part-time dislike her and the restaurant manager is under the mistaken impression that she likes him. She is hurt many times in a day. One day, Shizuka encounters Michinaga Keiichi, a customer at the family restaurant whom she knows personally. He is being censured at a kebab stall for placing an order even though he had no cash on hand, and is stuck with the stall owner whose words he does not understand. He manages to get out of trouble with Shizuka’s timely help. Keiichi is a guy who is bad at reading the situation. The two of them who have difficulty with regular communication are gradually attracted to each other, but … …

Characters
Yoshioka Riho as Nonomura Shizuka
A part-timer who lives with her deaf father Junsuke. She has the habit of staring at other people’s eyes and gesturing while she speaks since visual cues are important when communicating with him. However, she finds life hard as she is detested by ladies around the same age and also misunderstood by men who think she likes them.

Shofukutei Tsurube as Nonomura Junsuke
Nonomura Shizuka’s father who was born with a hearing impairment. His wife passed away when their daughter was small and he brought her up while he ran his photography studio. He has good photography skills but a quick temper. Because he was trained in lip reading as a child, he is able to read the lips of people whom he is familiar with and understand what they are saying to some extent even if they do not use sign language.

Nakajima Yuto as Michinaga Keiichi
A young employee who works for a large development company’s city design department. He is poor at reading situations and his straightforward manner of speaking causes him to be shunned by colleagues. However, Nonomura Shizuka accepts him with kindness.

Inaba Yu as Yagi Yasutaka
Nonomura Shizuka’s confidant. He is two years her senior. A former delinquent who is now the owner of a second-hand shop. He hires Shizuka after she loses her part-time job.

Fujii Mina as Hasegawa Makoto
Michinaga Keiichi’s colleague at work. She considers herself someone who understands him and seems to have some connection with Nonomura Shizuka in the past, but … …

Toda Keiko as Shinozaki Yukie
Nonomura Junsuke’s younger sister. While she is harsh on her brother, she treats her niece kindly and worries about her for always giving his matters priority. She does not use sign language and tries to communicate with Junsuke by gesturing and mouthing words.

Kimura Tae as Suzuma Sakura
An elementary school teacher who visits Nonomura Junsuke’s photography studio with the request to create a graduation photo album. With the current school building slated for demolition due to a consolidation of schools, she wants to leave many memories for the children.

Ending Theme
You are so beautiful by Ueda Masaki

This blog contains information and musings on current and upcoming Japanese dramas but is not intended to be comprehensive.
View all posts by jadefrost →
This entry was posted in NHK, Spring 2022 Dramas and tagged Kimura Tae, Shizuka-chan to Papa, Toda Keiko, Yoshioka Riho. Bookmark the permalink.