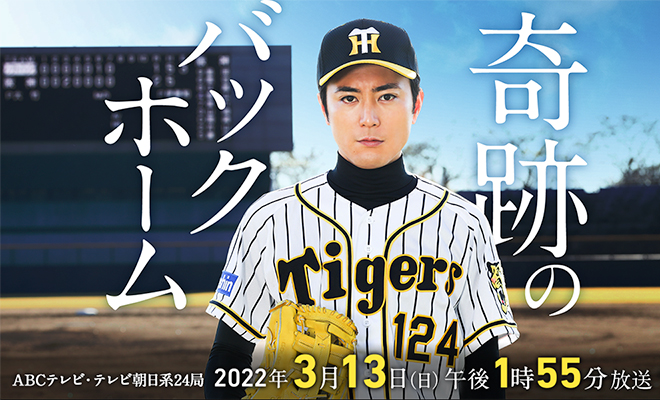 Date: From 1.55 p.m., 13 March 2022
Original Work: Kiseki no Back Home by Yokota Shintaro
Scriptwriter: Hikawa Kayo (Shousetsu Ou, Kirawareru Yuuki)
Director: Yoshimura Keisuke
Cast: Mamiya Shotaro, Ishida Hikari, Murase Sae, Miura Kagetora, Maruyama Tomomi
Synopsis: At the 2014 press conference of baseball team Hanshin Tigers, Yokota Shintaro (Mamiya Shotaro) was on stage. The Tigers second-round pick in the annual professional baseball draft, he inherited Hiyama Shinjiro’s former jersey number, 24. He got off to a bright start as a rookie who showed huge potential. Shintaro came from Kagoshima Jitsugyo, a high school well-known for its baseball. Even though he did not fulfil his dream of playing in the Koshien, it was his ball sense and big swing that caught the eye of Hanshin Tigers scout Tanaka Shuta (Maruyama Tomomi). Living up to expectations, he won a spot in the starting line up in his third year as a professional player. However, a year later, Shintaro starts suffering from unexplained headaches and blurred vision. A thorough checkup revealed that he has a brain tumour. This very unexpected diagnosis right before the professional baseball season that he looked forward to participating in and the doctor’s advice to forget about baseball for the time being caused Shintaro’s mind to become a completely blank. He underwent a major 18-hour surgery and had to fight tenaciously against losing his sight after that. While Shintaro endured the difficult treatment, his mother Manami (Ishida Hikari) took to living in the hospital ward to nurse him. The presence of his family and the many fan letters kept him going him through this dark period. After his discharge from hospital, Shintaro signed a development contract and set his sights on returning to the first team. Although he recovered his physical strength, his eyesight did not return to normal. He eventually made the decision to give up baseball. In the last baseball game of his career, which was his first official game in 1,096 days, he took the centre-field during the eight inning with two outs on second base, feeling a flood of emotions. Right after that, a “miracle” that he did not anticipate happened.
Official Website:www.asahi.co.jp/kisekinobh
Twitter: twitter.com/kisekinobh_6

This blog contains information and musings on current and upcoming Japanese dramas but is not intended to be comprehensive.
View all posts by jadefrost →
This entry was posted in ABC TV, Spring 2022 Drama Specials and tagged Kiseki no Back Home. Bookmark the permalink.