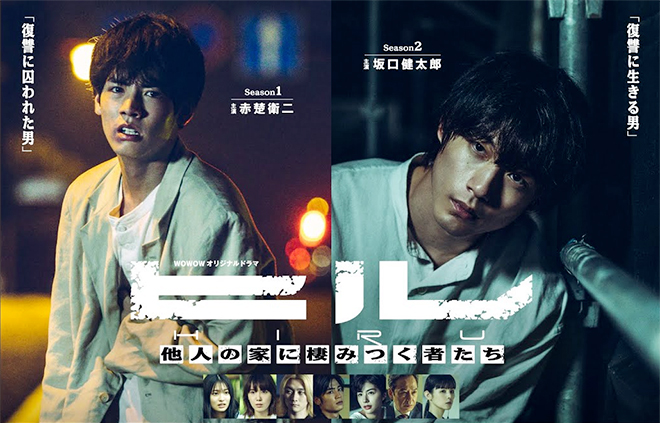 Synopsis
21-year-old Shinomiya Yuki has no friends and spends his days alone working part-time jobs. One day, when he returns home as usual after a night shift at his part-time job, a male stranger Yobi who has been stabbed in the abdomen with a knife is sitting in his room. Yobi wakes up at the hospital that he has been taken to and identifies himself as Shinomiya Yuki to detectives. Then he points to Yuki and states that he was stabbed by him. Yuki flees the hospital right away and becomes a fugitive instantly. At that moment, a mysterious young woman called Zoka appears right before Yuki and offers a helping hand. She tells Yuki that Yobi is a “leech” who has been living off him. After a narrow escape from a sudden attack by Yobi’s underling, Zoka negotiates with Yuki to help her take revenge on Yobi who murdered her father. He decides to collaborate with her and recover his name. Zoka is a “leech” who goes from one house to another while its occupants are away. The two of them eventually encounter Kara, a legendary “leech” who lives like an empty shell solely for the purpose of revenge.

Characters
Akaso Eiji as Shinomiya Yuki
A lonely young man who spends his days doing part-time jobs. One day, he is suddenly impersonated by another person, framed for attempted murder and pursued by the police. That is when he meets Zoka and helps her in her revenge.

Iitoyo Marie as Hako
A new “leech” who came to Tokyo at the same time she ran away from home. She is the only person who knows about Kara’s past and she seems to be thinking of reuniting with him to save him from the world of “leeches”.

Yanagi Shuntaro as Yobi
A “leech” who is impersonating Shinomiya Yuki. He was a juvenile who caused a sensation for murdering his parents and became a “leech” after he was rescued by Kara. He treats “leeches” like toys and plays with them to kill time.

Yoshikawa Ai as Zoka
A “leech” who was raised by a homeless man and is not in a family register. She has been living only for revenge on Yobi and became a “leech” after the man whom she adored as her father was killed by Yobi. She gradually opens up to the straightforward Shinomiya Yuki.

Sakuma Yui as Robo
She became a “leech” after she was saved by Kara. She secretly likes him and continues to support him by his side. She does not feel good about Hako approaching Kara.

Itao Itsuji as Yashima
The boss of a shady organisation. In exchange for giving “leeches” fake IDs, he sells off what he has made them collect for a high price.

Sakaguchi Kentaro as Kara
A legendary “leech” who goes by the nickname leech hunting Kara. Mishin who was like a mother to him and Nanashi was murdered by a masked man in the past and he has been living only to track down the man’s whereabouts and take revenge.

Miura Masaki as Nanashi
A “leech” whom Kara admires like a real older brother. He and Kara were picked up and raised by Mishin. He is suffering from a terminal illness and has been living in a hospital.

Shuhama Harumi as Mishin
A woman who raised the orphans Kara and Nanashi to be “leeches” and was like a mother to the two of them. She was murdered by a masked man one day.

This blog contains information and musings on current and upcoming Japanese dramas but is not intended to be comprehensive.
View all posts by jadefrost →
This entry was posted in Spring 2022 Dramas, WOWOW and tagged Akaso Eiji, Hiru Series, Iitoyo Marie, Sakaguchi Kentaro. Bookmark the permalink.