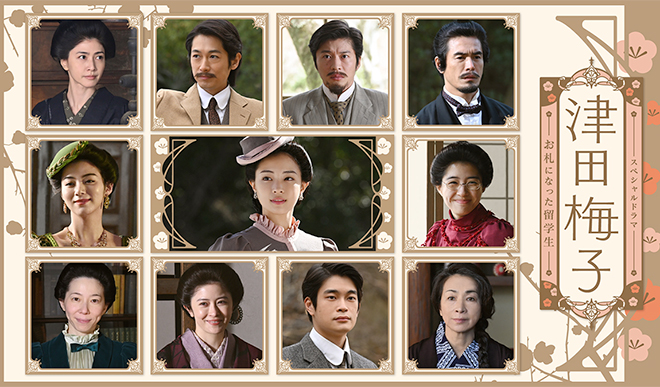 Date: From 9.00 p.m., 5 March 2022
Scriptwriter: Hashibe Atsuko (Hankei 5 metre, Mokomi, Shitteru Wife)
Director: Fujita Meiji
Cast: Hirose Suzu, Ikeda Eliza, Sakuma Yui, Miyazawa Ema, Inowaki Kai, Ito Hideaki, Uchida Yuki, Harada Mieko, Dean Fujioka, Tanaka Kei, Hiraiwa Kami
Synopsis: 6-year-old Ume (Hirose Suzu) becomes one of the first Japanese females to study abroad in America in 1871 at her father Tsuda Sen’s (Ito Hideaki) recommendation. As there is no place in Japan for females to receive high quality education, it is decided that female international students would be sponsored by the Hokkaido Development Commission which deems education necessary for mothers to raise outstanding men. Ume is the youngest among the group which also includes 14-year-old Yoshimasu Ryo and Ueda Yasushi, 11-year-old Yamakawa Sutematsu and 9-year-old Nagai Shige. Sen tells Ume not to forget that she carries the hopes of the country with her. Holding back her loneliness from being separated from her family and mother Hatsu (Uchida Yuki) at a young age, she goes to America with this duty in mind. A year after they began studying in America, Ryo who has been suffering from an eye ailment and a terribly homesick Yasushi decide to return to Japan. This comes as a huge shock to Ume who admires the kind Ryo. But recalling her father’s words, she fights back tears and continues with her studies. The person who supports her in many ways is Mori Arinori (Dean Fujioka) who would later become Japan’s first Minister of Education. 11 years later in 1882, 17-year-old Ume finishes studying abroad and returns to Japan. She talks to Sutematsu (Ikeda Eliza) and Shige (Sakuma Yui) who had studied with her, about her dream of setting up an English school where everyone can learn the language. However, while she was studying abroad, the Hokkaido Development Commission was disbanded. The Ministry of Education which should have taken over the project, has no interest in female exchange students and Ume cannot even find a place to work. Having always thought that government-sponsored international students have to contribute to the country, Ume is astounded. In addition, she gets a culture shock when she realises the low status of women in Japan. Meanwhile, Shige announces that she is getting married to a man she met while studying abroad. Ume thinks a Japanese marriage is not a marriage of equals and cannot offer her sincere congratulations. Through Shige’s introduction, she meets university professor Kanda Naibu (Inowaki Kai) who makes her heart skip a beat but learns that he likes Sutematsu. After that, Ume ends up working as a live-in private tutor to the wife and children of Ito Hirobumi (Tanaka Kei), the future first Prime Minister, for a period of time. She later goes on to become a pioneer in women’s education and found one of Japan’s first schools of higher education for women Joshi Eigaku Juku, a school that is now known as Tsuda University.
Official Website:www.tv-asahi.co.jp/tsudaumeko
Twitter: twitter.com/umeko2022

This blog contains information and musings on current and upcoming Japanese dramas but is not intended to be comprehensive.
View all posts by jadefrost →
This entry was posted in Spring 2022 Drama Specials, TV Asahi and tagged Harada Mieko, Hirose Suzu, Ito Hideaki, Tanaka Kei, Tsuda Umeko, Uchida Yuki. Bookmark the permalink.