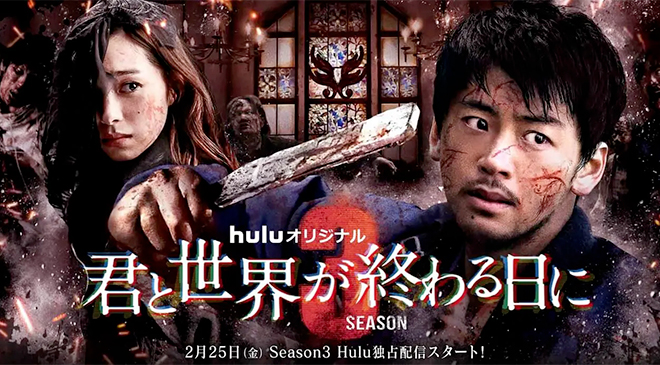 Synopsis
During the 10 months that have gone by, devastation has spread, food sources have been depleted and humans no longer have a refuge. Nowhere is safe and nothing believable in this apocalyptic world of the living dead. Mamiya Hibiki’s girlfriend Ogasawara Kurumi has disappeared with the mysterious group X while infected with the Golem virus and pregnant with his child. Believing that she is alive under X, Hibiki and Mihara Yuzuki set out to search for her. Along the way, they encounter Murota Shinji whom Hibiki once saved from golems and hear rumours of a man who will not die even when bitten by golems. The journey is long and arduous. Thinking that he will not be able to see Kurumi again, they are ready to give up when they arrive at a site sacred to Hikari no Monshou, a religious group that aims to create a new world from this calamity. Its founder Wantiti says “Fear not, death is always with us” and even offers a helping hand to the two of them who have come from outside. Many of his followers have a great faith in him. During a ritual, Hibiki and Yuzuki cannot believe their eyes when a golem appears before Wantiti and attacks him but he remains unaffected despite being bitten. Is this a miracle or a fabrication? If Hibiki believes in him, will he be able to save what he loves. He thinks that there may be hope of saving Kurumi here and wonders what he should do.

Characters
Takeuchi Ryoma as Mamiya Hibiki
He survived the end of the world as the leader of a group of wanderers and reunited with his girlfriend Ogasawara Kurumi whom he was separated from. After the tragedy at the shelter Kibou no Ie, he sets out on a journey to pursue Kurumi who has disappeared again.

Nakajo Ayami as Ogasawara Kurumi
Mamiya Hibiki’s girlfriend who became a test subject for the development of a vaccine for the Golem virus. She suffered from memory loss after being infected by the virus and disappeared while pregnant with his child.

Yokomizo Naho as Mihara Yuzuki
She was part of the group of wanderers led by Mamiya Hibiki. After witnessing the tragedy at the shelter Kibou no Ie, she decides to embark on a journey with him again.

Kim Jae Hyun as Kai
A mysterious guy who has the same face as the young Korean Yun Min Joon who lost his life while part of Mamiya Hibiki’s group of wanderers. He worked behind the scenes in the tragedy at the shelter Kibou no Ie and later disappeared with Ogasawara Kurumi.

Tamayama Tetsuji as Wantiti
The founder of the religious group Hikari no Monshou, a religious group that aims to create a new world from this calamity. He possesses mystical powers and does not get infected even when bitten by a golem.

Sakurai Hinako as Miyagi Iori
She and her boyfriend Kajiura Masato were saved by the religious group, Hikari no Monshou, while they were wandering around. She has no physical strength and seems frail. She has survived in this apocalyptic world with Masato’s help.

Wada Masato as Kajiura Masato
Miyagi Iori’s boyfriend. He has a jolly nature and likes telling jokes, but he is also willing to risk his own life in order to protect Iori.

This blog contains information and musings on current and upcoming Japanese dramas but is not intended to be comprehensive.
View all posts by jadefrost →
This entry was posted in Hulu, Winter 2022 Dramas and tagged Kimi to Sekai ga Owaru Hi ni Series, Tamayama Tetsuji. Bookmark the permalink.