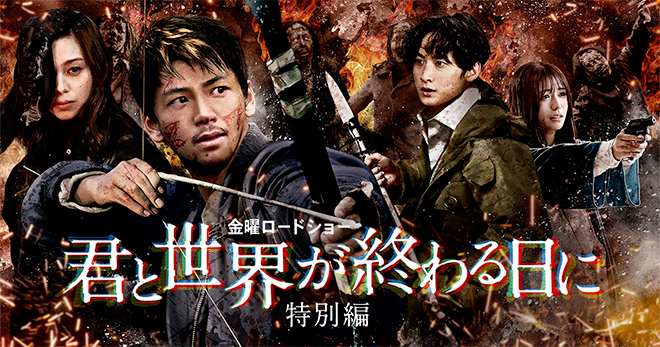 Date: From 9.00 p.m., 25 February 2022
Scriptwriter: Ushio Kentaro (No Side Game, Black Pean, Chiisana Kyojin)
Director: Sugawara Shintaro
Cast: Takeuchi Ryoma, Nakajo Ayami, Kasamatsu Sho, Iitoyo Marie, Yokomizo Naho, Kim Jae Hyun, Koseki Yuta, Nagahama Neru, Otsu Hirotsugu, Awaji Kosei, Shukugawa Atom, Ono Yuriko, Matsukado Yohei, Tamayama Tetsuji
Synopsis: One day, the apocalyptic world is suddenly occupied by zombies called golem. An unknown virus runs rampant, turning people who have been bitten into zombies. After the tragedy at the shelter Kibou no Ie, former car mechanic Mamiya Hibiki (Takeuchi Ryoma) goes after his girlfriend Ogasawara Kurumi (Nakajo Ayami) who has vanished together with the mysterious Kai (Kim Jae Hyun), a member of the shadowy group X. She is carrying Hibiki’s child but has been infected with the virus. Hibiki heads to a university hospital that has a medical remedy in order to save her. He barely makes it to there amid the calamity. However, he realises that there has already been an outbreak of the golem virus that started from the patients who were brought in. During the ensuing panic, Ito Aki (Nagahama Neru), a nurse who is pregnant with doctor Igarashi Shuichi’s (Koseki Yuta) child, is pushed down the stairs by someone and loses consciousness. She later wakes up in a hospital ward with a large number of zombies. The hospital is locked down, creating an extreme situation where there is no way out. To survive in this world for Kurumi’s sake, Hibiki collaborates with Igarashi and other survivors, seeking to escape from the hospital which is teeming with zombies and access a research lab that has the medical remedy but … …
Official Website: www.ntv.co.jp/kimiseka/special

This blog contains information and musings on current and upcoming Japanese dramas but is not intended to be comprehensive.
View all posts by jadefrost →
This entry was posted in NTV, Winter 2022 Drama Specials and tagged Kimi to Sekai ga Owaru Hi ni Series, Tamayama Tetsuji. Bookmark the permalink.