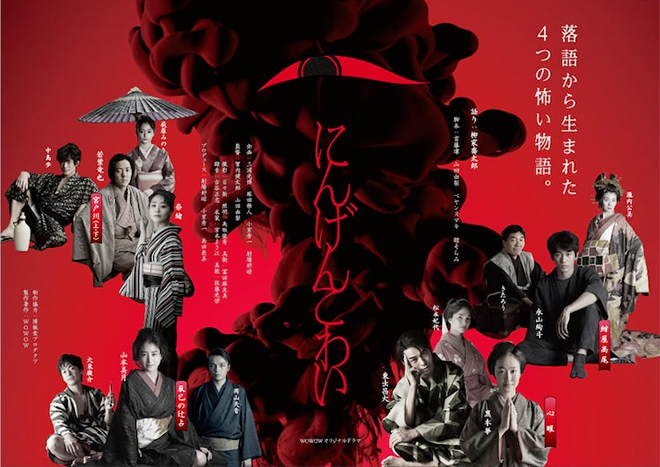 Introduction
Rakugo is associated with humorous stories but it is actually also a treasure trove of horror stories. This modern interpretation of four classic rakugo plays – Shingan, Tatsumi no Tsujiura, Koya Takao and Miyatogawa, depicts the desires of the characters that appear and the universality of how frightening humans can be.

Shingan
Synopsis: One day, a blind masseur Umekichi (Higashide Masahiro) hears from a geisha Koharu (Matsumoto Kiyo) that his prayers will come true if he visits the healing buddha at Kayabacho to offer prayers a hundred times and he decides to do that. Finally on the hundredth day, Umekichi realises that his eyes are open after he gets home. However, Umekichi’s wife Otake (Kuroki Haru), who has been supporting him, looks unhappy for some reason. Several days later, he is told by a customer’s husband that Otake is less attractive compared to Koharu … …
Cast: Kuroki Haru, Higashide Masahiro, Matsumoto Kiyo

Tatsumi no Tsujiura
Synopsis: Inosuke (Okayama Amane) brags to a friend Kikujiro (Daito Shunsuke) that the prostitute Otama (Yamamoto Mizuki) is besotted with him. A skeptical Kikujiro instigates him to test her if he is confident. As a result, Inosuke tells a lie to Otama and asks her to commit suicide together with him. Otama readily agrees to his request. Told by Kikujiro to confirm it, Inosuke hides his happiness as he heads to a river with Otama … …
Cast: Yamamoto Mizuki, Okayama Amane, Daito Shunsuke

Koya Takao
Synopsis: Kyuzo (Nagayama Kento), a worker at a dyeing house, has fallen in love with beautiful portraits illustrating Edo’s top high-ranking courtesan Takao Dayu (Takiuchi Kumi). He is so lovelorn that he can no longer work. His supervisor (Okuda Yohei) can hardly bear to see Kyuzo this way and promises to let him save up the money by the third year. When he reaches the third year, Kyuzo finally heads to the red light district with a quack doctor (Kitaro) acting as the intermediary. He gets to see the real Takao Dayu but … …
Cast: Nagayama Kento, Takiuchi Kumi, Kitaro

Miyatogawa
Synopsis: Hanshichi (Wakaba Ryuya) and Kimi (Nao), who are about to hold a wedding ceremony, get entangled with a drunken customer Kame (Nakajima Ayumu) on the boat. As Kimi watches Kame’s face, she realises that he is the culprit who was violent with her friend Ohana (Hagiwara Minori). Hanshichi and Ohana had once made a commitment to be husband and wife. However, Ohana has been missing since the day she was attacked by Kame. Hanshichi hears from Kimi that Kame was Ohana’s attacker. When he cautiously asks Kame for the truth, Kame begins to brag about that time, “She was an attractive woman” … …
Cast: Nao, Wakaba Ryuya, Hagiwara Minori, Nakajima Ayumu

This blog contains information and musings on current and upcoming Japanese dramas but is not intended to be comprehensive.
View all posts by jadefrost →
This entry was posted in Winter 2022 Dramas, WOWOW and tagged Higashide Masahiro, Kuroki Haru, Nagayama Kento, Ningen Kowai. Bookmark the permalink.