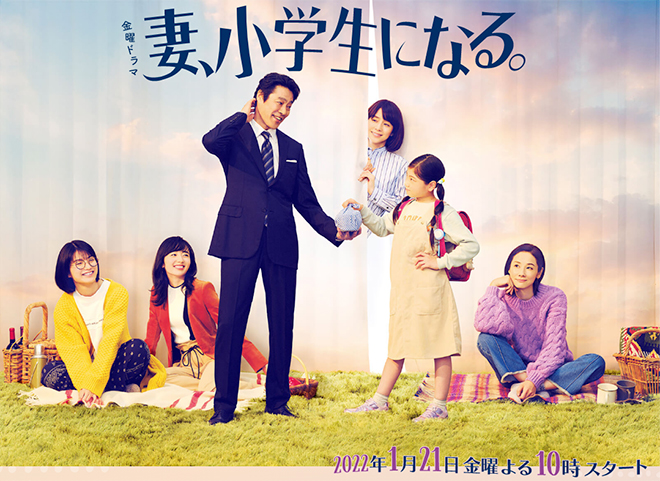 Synopsis
Since Niijima Keisuke’s beloved wife Takae passed away 10 years ago, he has considered the rest of his life without her as “borrowed time”. He feels lifeless and is seen as a melancholic man. Although Keisuke wishes for the happiness of their daughter Mai who is his only family, he feels sorry for not doing anything besides earning a living and hardly communicates with her. For father and daughter, time stopped when Takae died. Then one day, an unknown girl carrying a school bag visits them. She introduces herself as his wife. Keisuke cannot believe it but she seems like Takae. She has been reborn after their sudden separation 10 years and is now an elementary school student called Shiraishi Marika. She cannot live together with him and her curfew is 6 pm. They will arouse suspicion when they are together and the police will be called if he hugs her exuberantly. The time that had stood still for this kind of strange family of three – devoted husband Keisuke, wife who now has the appearance of an elementary school student, and daughter who will not grow up – starts moving again. Convinced that Marika is Takae’s reincarnation, Keisuke gains enthusiasm for life and proposes to marry her when she turns 18 … …

Characters
Tsutsumi Shinichi as Niijima Keisuke
A devoted husband who lost his beloved wife Takae 10 years ago and lives with his daughter Mai. He considers the rest of his life without her as “borrowed time”. He works for the food manufacturer Rabbit Foods and is transferred to its sales department due to retirement age when he turns 50. An elementary school student claiming to be his wife appears one day while both his relationship with his daughter and his work are not going well.

Ishida Yuriko as Niijima Takae
Niijima Keisuke’s beloved wife who passed away 10 years ago. She was a chef and worked for a popular Western restaurant. She was good at cooking and was like the sun to the family. She loved them with all her heart and took care of her husband and daughter who need a lot of attention.

Makita Aju as Niijima Mai
Niijima Keisuke and Takae’s 20-year-old daughter. She is introverted by nature but her mother’s sudden death forced her to become an adult without being able to learn life skills from her. Even though she got a job after graduating from high school, she is currently unemployed.

Maida Nono as Shiraishi Marika
A fourth grade elementary school student who is the reincarnation of Niijima Takae. Born as Shiraishi Marika she suddenly recalls just before her 10th birthday that she is Niijima Takae. She visits the Niijima residence where she used to live and is reunited with her husband and daughter. She starts to encourage the two of them who have still not moved on from her death.

Yoshida Yo as as Shiraishi Chika
Shiraishi Marika’s mother who raised her on her own. As she feels that she was not loved by her own mother, she is bothered that Marika feels distant and constantly worries how she should face her daughter. When she learns that Marika has been meeting a family that she does not know about behind her back, she tries to find out her secret.

Kamiki Ryunosuke as Koga Yuri
Niijima Takae’s younger brother. His aspiration is to be a manga writer but he has not been able to make his debut despite winning an award and has managed to get by with part-time work. He is estranged form his brother-in-law Keisuke but is on good terms with his niece Mai. Because of his beloved older sister’s sudden passing, he struggles every day to find the ideal way of life but he feels something is wrong and resigns himself to the passage of time.

Morita Misato as Moriya Konomi
The head of Rabbit Food’s sales department. Niijima Keisuke’s younger boss. Although she was selected to lead the department at a young age, she finds it a burden to be the boss when she is not particularly ambitious and is also aware of her own limitations.

This blog contains information and musings on current and upcoming Japanese dramas but is not intended to be comprehensive.
View all posts by jadefrost →
This entry was posted in Fuji TV, Winter 2022 Dramas and tagged Ishida Yuriko, Makita Aju, Tsuma Shougakusei ni Naru, Tsutsumi Shinichi. Bookmark the permalink.