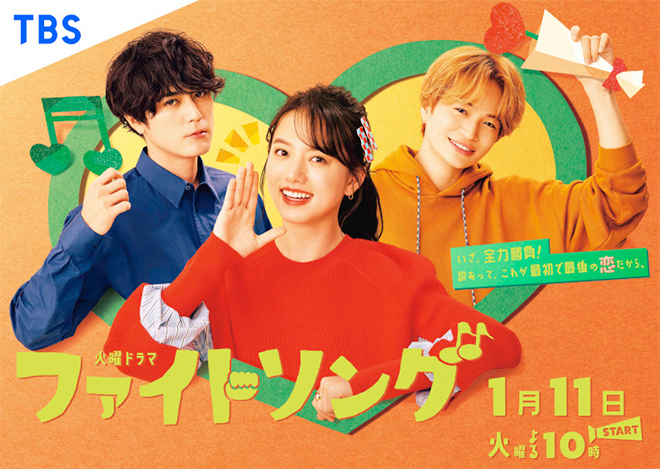 Synopsis
Cheerful and tenacious Kisara Hanae grew up in an orphanage and aspires to represent Japan in karate. However, her dream is suddenly cut short at the age of 21. After losing everything, Hanae’s life hits rock bottom. Despite feeling listless each day, she starts working part-time for her childhood friend Natsukawa Shingo’s house cleaning service, Sunshine Cleaning. One day, Hanae makes a visit to the house of a customer Ashida Haruki, a one-hit musician who has seen better days. He turns out to be the composer of the song that she always listened to before her karate matches. Ashida is on the verge of being fired by his agency in two months if he does not produce a hit song. Hanae has been devoted to karate all this while and never been in love while Ashida cannot write good songs since he does not understand people’s hearts. The two of them unexpectedly join hands and take a crack at a fake yet real romance. Flashy Shingo has been in love with Hanae and frets about Ashida and Hanae as they suddenly get close to each other. A love triangle soon develops. But Hanae has a “secret” that she cannot tell anyone about and decides this will be the last romance of her life.

Characters
Kiyohara Kaya as Kisara Hanae
She had dreamed of representing Japan in karate but this dream was abruptly cut short and she is at the lowest point in her life. She grew up at the orphanage Asahi Gakuen and has overcome all sorts of adversities with characteristic cheerfulness and grit. She had been devoted to karate and never been in love. After encountering Ashida Haruki, the composer of the song that she always listened to before her matches, she decides to take on her first romance in life.

Mamiya Shotaro as Ashida Haruki
A down-and-out musician who is a one-hit wonder. He has been warned by his manager Date Yumiko that his contract will be terminated if he does not produce a hit song in next two months. Since he does not understand people’s hearts, he cannot write good songs. He is poor at communicating, has never truly liked someone and practically inexperienced in love. Then he makes the acquaintance of Kisara Hanae by chance and is moved by her … …

Kikuchi Fuma as Natsukawa Shingo
Kisara Hanae’s childhood friend who grew up at the orphanage Asahi Gakuen. He runs a house cleaning service Sunshine Cleaning and carries tools in his camper van. He appears shallow and flashy but is actually a kind, cheerful and simple guy. He has been wholeheartedly in love with Hanae and does his utmost to express his love but she dismisses it. He gets unnerved by Ashida Haruki’s sudden appearance and rapid development in the relationship between Hanae and Ashida.

Kuriyama Chiaki as Date Yumiko
Ashida Haruki’s manager who was quick to spot his talent. Now that Ashida is no longer able to write songs, she also feels bad for him after taking care of him for a long time and hopes he will do his best to make a comeback even though she has given the ultimatum. She takes pride in being the only one able to support Ashida. But Kisara Hanae’s appearance triggers feelings that she was unaware of … …

Hashimoto Jun as Tateishi Masatsugu
A doctor whom Kisara Hanae confides and consults due to her difficulty talking to people close to her. In the course of interacting with Hanae for a long time, he is able to break the tension with silly talk not just as a doctor but as a friend sometimes.

Inamori Izumi as Isobe Naomi
The director of the orphanage where Kisara Hanae and Natsukawa Shingo grew up at. She is like a surrogate mother to Hanae and the other children, and watches over them. While she lets Hanae stay at her own house after Hanae withdrew from karate and started moping about, she scolds and encourages her. She has a generous nature and does not care about small matters.

This blog contains information and musings on current and upcoming Japanese dramas but is not intended to be comprehensive.
View all posts by jadefrost →
This entry was posted in TBS/MBS, Winter 2022 Dramas and tagged Fight Song, Inamori Izumi, Kiyohara Kaya, Kuriyama Chiaki, Mamiya Shotaro, Okada Yoshikazu. Bookmark the permalink.