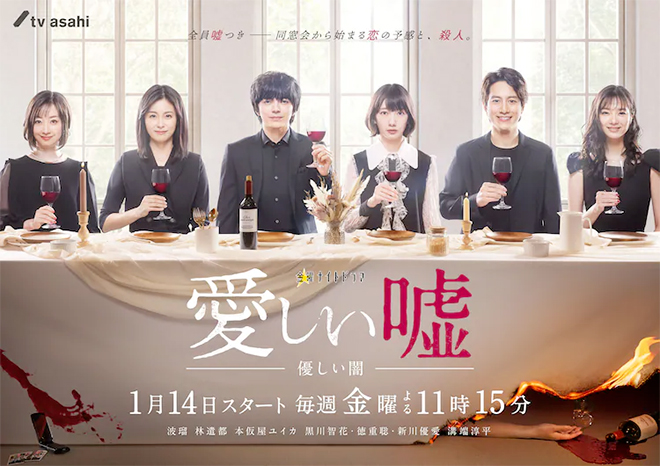 Synopsis
Imai Mio came to Tokyo from her hometown of Yamanashi Prefecture and made her debut as a manga artist three years earlier. However, she did not gain much popularity and now works as a manga assistant with no bright future in sight. One day, 14 years after her junior high school graduation, a class reunion is held out of the blue. Mio gets a request from her first love Amemiya Shoichi, who initiated this gathering, to take charge of the reception duties and excitedly returns to Yamanashi. The cool and handsome Shoichi was like a perfect prince to all the female students back then. Mio had secretly liked him for afar but this class reunion results in his active pursuit of her. Six good friends including Amemiya who is now the CEO of an IT company, Fukazawa Ryo, Honda Reiko, Nose Yumi and Iwasaki Nanae reunite. A faint memory of having taken a similar photograph in the past flits through Mio’s mind as the six of them take a group shot. Those attending the class reunion visit their old school at Shoichi’s suggestion in order to unearth the time capsule they had buried when at the time of their graduation. But they run into difficulty locating the time capsule since no one remembers exactly where it was buried. Even though Shoichi has to leave earlier due to an urgent matter, Reiko persistently carries on searching and finally finds the time capsule. Mio sees a paper with the words “Everyone, don’t forget. Nakano Miyuki.” However, for some reason, she and all present cannot recall Nakano’s face … … Then of all things, some of the six good friends get caught up in incidents and start dying one after another. Each of them are hiding something shockingly dark which triggers endless lies and an unstoppable, tingling love-hate tragedy.

Characters
Haru as Imai Mio
A manga artist’s assistant. She hates causing a scene and is the sort who would apologise even if she is not at fault. She made her debut as a manga artist three years ago but did not gain much popularity. Helped by the presence of her only friend called Kuro who has sent her fan letters since the time of her debut, she continues to soldier on and wait for her chance to come. An idea that she had been sitting on is stolen by a junior and just as she is ready to give up on her path, she receives an invitation to a junior high school class reunion and returns to her hometown in Yamanashi Prefecture. She is reunited with her first love Amemiya Shoichi. She had thought her feelings were one-sided but this time, he pursues her … …

Hayashi Kento as Amemiya Shoichi
Imai Mio’s first love. A handsome, cool guy who was like the perfect prince – an all rounder in studies and sports. Female students adored him in junior high school. Then he learns that his alma mater is going to close down 14 years after graduating from school and he plans a class reunion. He is now the CEO of an IT company in Tokyo and has achieved success. Even though he is still very popular with females like school days, he also appears to have some secret … …

Mizobata Junpei as Fukazawa Ryo
Imai Mio’s childhood friend and classmate in junior high school. He runs Fukazawa Winery with his parents in their hometown of Yamanashi. He has always been awkward and curt. While he is not the sociable type, he has a lovable nature. He continues to work hard to achieve his dream of making good wine. He has always liked Mio since they were children but … …

Motokariya Yuika as Honda Reiko
Imai Mio’s classmate in junior high school. She is now a lawyer at a Tokyo law firm. She is serious and constantly cool and collected. At the class reunion, she shows a greater obsession than anybody else in digging up the time capsule that was buried at the time of their graduation. After the class reunion, she becomes Mio’s confidant.

Kurokawa Tomoka as Nose Yumi
Imai Mio’s classmate in junior high school. A full-time housewife. The type who is a dutiful wife and devoted mother and likes looking after others. She was looked down on by Iwasaki Nanae since junior high school. But she was the first among the classmates to get married and into an important local family. She is now a successful member of society and seems to be happy but she actually has a secret that she cannot tell anyone.

Shinkawa Yua as Iwasaki Nanae
Imai Mio’s classmate in junior high school. She has been surrounded by guys since those days and dreamed of being a TV presenter. However, she has been an employee at a local company due to family reasons. She is still as ambitious now as she was in the past and locks onto Amemiya Shoichi whom she meets again at the reunion. She regards Mio as her rival … …

This blog contains information and musings on current and upcoming Japanese dramas but is not intended to be comprehensive.
View all posts by jadefrost →
This entry was posted in TV Asahi, Winter 2022 Dramas and tagged Haru, Hayashi Kento, Itoshii Uso Yasashii Yami. Bookmark the permalink.