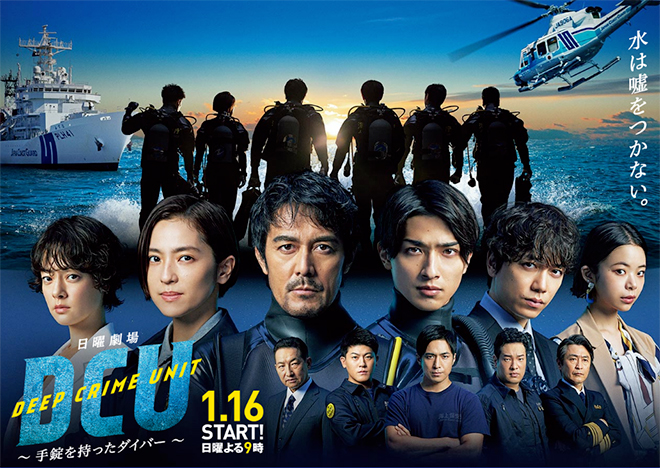 Synopsis
Japan is surrounded by the sea on all sides and has many rivers, lakes and water sites. Despite numerous cases where dead bodies are dumped or hidden in water, the rate at which these are solved is lower than cases that happen on land. This is because it is fraught with many dangers and difficulties. Niina Masayoshi is the leader of the Deep Crime Unit, known as DCU. This new team of specialists formed by the Japan Coast Guard in 2022 investigates underwater incidents and accidents. Their mission is to solve cases that happen in the seas, rivers and lakes across the country which are difficult for police investigations, and to defend that coastline against terrorism. Niina may disregard the rules but he never gives up on his pursuit of the truth. He will not tolerate the sea being soiled and the truth remaining unsolved. Together with the members of the DCU including Nishino Toma, an elite coast guard officer; and Seno Haruki whose life Niina once saved, Niina dives underwater to solve all sorts of difficult cases and confronts the evil lurking beneath the surface. They are given the authority to investigate not only at sea and in the water but also on land, and this creates friction with the police. Their first investigation takes place at a lake formed by a dam in Gunma Prefecture. A major typhoon that made land a few days ago changed the current in the lake, leading to the discovery of the fragments of a person’s skull. When the DCU dive in to investigate the bottom of the lake which has a depth of 100 metres, an unexpected scene spreads out before them.

Characters
Abe Hiroshi as Niina Masayoshi
The leader of DCU. A man who ignores the rules and will not rest until he gets to the bottom of the truth. He has an uncompromising nature and will not be swayed by other people’s values.

Yokohama Ryusei as Seno Haruki
A member of DCU. Niina Masayoshi’s buddy. He is a highly skilled diver and by far that best in DCU. This can be a driving force for the team and also cause trouble for them if he goes to extremes. His parents died in an accident at sea when he was a child and he was rescued by Niina Masayoshi.

Nakamura Anne as Nariai Takako
A member of DCU. She has gone through a lot in life and became the Japan Coast Guard’s first female diver after great perseverance. She is able to cheer up anyone in the team who is feeling depressed with her genuine and positive nature. She is trusted by the members of DCU.

Yamazaki Ikusaburo as Shimizu Kenji
A detective with the Tokyo Metropolitan Police Department’s First Public Security Division who has been promoted quickly. He will not allow the DCU to enjoy the same position as the police which presides over land investigations. Despite his prickly demeanour and barbed words, he acknowledges Niina Masayoshi in his own way and the two men use each other to solve cases.

Shuri as Kanda Ruri
A member of DCU’s cyber team. She was transferred to support the unit when it was established. Her cyber skills are unrivalled. Niina Masayoshi also has great faith in her abilities.

Takahashi Mitsuomi as Nishino Toma
A member of DCU. He served as the leader of the special rescue team which is said to be the most demanding role in the Japan Coast Guard, and rose through the ranks without a blot. He is unhappy that he was robbed of the role of commanding officer and also clashes with him. But he supports the team as the second in command.

Tsukuda Norihito as Sakuma Yuji
Niina Masayoshi’s direct superior who trained him back when he was a rookie. He hails from the Security and Rescue Information Division. He is the person that Niina trusts the most and he also enjoys the faith of the coast guard’s top brass. He proposed the establishment of the DCU and was also the one who recommended that Niina lead the unit.

Shunputei Shota as Hayakawa Mamoru
He is the second highest ranking officer in the Japan Coast Guard. An ambitious man seeking to become the commander by making the newly created DCU a success. Niina Masayoshi stands out in many ways and he finds his methods dangerous and intends to use every opportunity to bring him down.

Ichikawa Mikako as Kuroe Mako
She becomes the head of the forensic lab after DCU’s establishment. She has a candid personality and will not be satisfied if she is not able to determine whether something is right or wrong. She and Niina Masayoshi have been acquainted for a long time. They bonded after going through various hardships together and are currently engaged.

This blog contains information and musings on current and upcoming Japanese dramas but is not intended to be comprehensive.
View all posts by jadefrost →
This entry was posted in TBS/MBS, Winter 2022 Dramas and tagged Abe Hiroshi, DCU, Yamazaki Ikusaburo, Yokohama Ryusei. Bookmark the permalink.