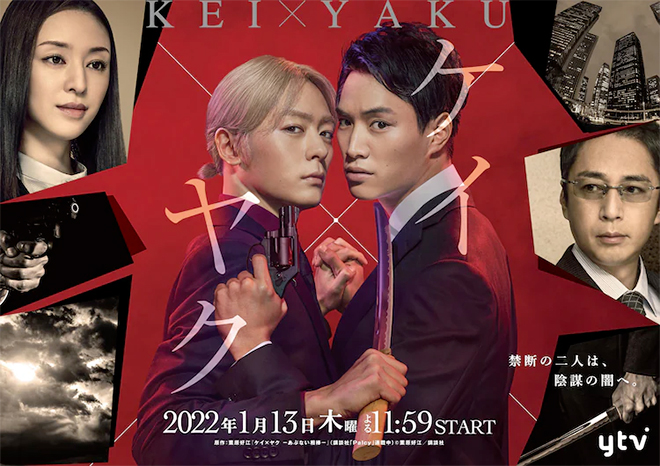 Synopsis
28-year-old Kunishita Ichiro, an investigator at the Tokyo Metropolitan Police Department’s Public Safety Bureau, has yet to come to terms with the quick closure of a missing persons case dubbed the Joker case that he investigated three years ago and continues to bargain with Taguchi Akira, the bureau chief, to reopen it. But he is ordered on a completely different mission by Taguchi who wants him to carry out secret surveillance on Hanabusa Shiro, a young boss of Minegami-gumi, a designated organised crime group. A man of many mysteries, Hanabusa had been a part-time worker until three years ago when he infiltrated the group for a certain purpose and got to the top in remarkable speed. After that, he established ties with leading figures in various circles including political and business establishments and became a man with powerful influence. Kunishita questions the decision to keep an eye on a gangster but Taguchi does not give any answers. While tracking Hanabusa’s movements, Kunishita discovers a man covered in injuries and on the verge of death. He learns about a fight club at Hanabusa’s members-only salon from this man called Shiraishi and successfully penetrates the salon by passing himself off as a fight club challenger. In the course of getting close to Hanabusa for his mission, Kunishita learns a startling truth. He and Hanabusa decide to form a fake lovers’ pact in order to hide their collaboration. As they secretly investigate a case that has been shrouded in darkness, they get dragged into a huge conspiracy that will gradually shake the country and is also tied to their own destinies.

Characters
Suzuki Nobuyuki as Kunishita Ichiro
An investigator who belongs to the Tokyo Metropolitan Police Department’s Public Safety Bureau. He lost his parents in an incident when he was a child and has been all alone. Despite his good looks and outstanding athleticism, he is too serious and does not know how to enjoy life outside of work. He has no experience in romance. As he has lived by himself for a long time, he is good at doing household chores including cooking.

Inukai Atsuhiro as Hanabusa Shiro
A young boss of Minegami-gumi, a designated organised crime group. He was abandoned by his parents not long after birth and grew up at an orphanage. Although he was a part-time worker until three years ago, he infiltrated Minegami-gumi for a certain purpose and got to the top in remarkable speed. He does not fear death, feels that he has nothing to lose and lives in the moment. He has a sweet tooth and lives on sweet things.

Kuriyama Chiaki as Nakaba Rion
An investigator who belongs to the Tokyo Metropolitan Police Department’s Public Safety Bureau. She was Kunishita Ichiro’s mentor and somewhat like a mother hen. She has a candid personality and is strong enough to throw Kunishita over her shoulder. She is also someone dear to Hanabusa Shiro and becomes the person who binds the two of them together.

Tokui Yoshimi as Taguchi Akira
The chief of the Public Safety Bureau. An unfathomable man who is always composed and does not betray his emotions.

Matsumoto Toshio as Nakamura Yuji
A senior member of Minegami-gumi, he treats Hanabusa Shiro like an enemy.

Itao Itsuji as Osu Kimiaki
The Prime Minister. He enjoys high approval ratings but he has a secret.

This blog contains information and musings on current and upcoming Japanese dramas but is not intended to be comprehensive.
View all posts by jadefrost →
This entry was posted in NTV, Winter 2022 Dramas and tagged Kei x Yaku. Bookmark the permalink.