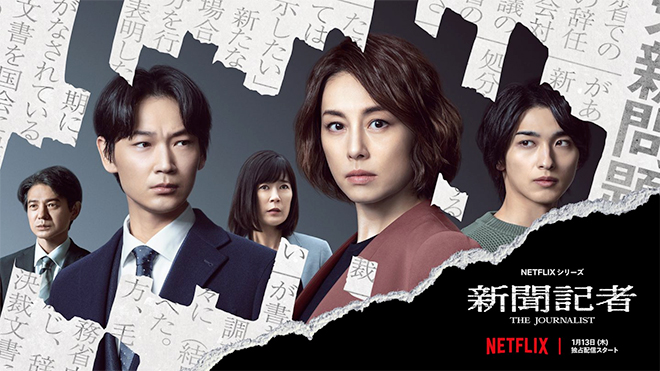 Synopsis
Known as the maverick of news media, Tohto Shimbun journalist Matsuda Anna is a rarity in the newspaper industry. She defiantly seeks the truth and strives to expose issues in modern Japanese society despite coming under intense pressure. Murakami Shinichi, a young, elite government bureaucrat, presses ahead with his duties to the first lady while university student Kinoshita Ryo hunts for a job while working part-time making newspaper deliveries and has neither interest nor knowledge of politics. The destinies of these three people who live in different worlds, begin to intertwine in the wake of an unexpected scoop that shocks the nation. It is an exposé on Chubu Finance Bureau’s compliance with the wishes of the prime minister’s office to sell public land cheaply to the elite Eishin Academy which has close ties to the prime minister’s wife. Tohto Shimbun responds to its competitor’s scoop by pulling Matsuda off a different fraud case that she has been pursuing, to investigate this land deal with Eishin Academy. When the prime minister explicitly denies any involvement, Chubu Local Finance Bureau scrambles ensure that the deal cannot be linked to him or his wife by amending documentation related to the sale. Riddles and suspicions emerge little by little as Matsuda contacts potential sources. However, just when it seems that she is getting closer to the truth, the answer seems to recede. Then the actions of Suzuki Kazuya, one of the bureau’s officers tasked with amending the incriminating documents, triggers a jumble of emotions and motivations among people in various positions including the media, his wife Mayumi, politicians and prosecutors … …

This blog contains information and musings on current and upcoming Japanese dramas but is not intended to be comprehensive.
View all posts by jadefrost →
This entry was posted in Netflix, Winter 2022 Dramas and tagged Ayano Go, Fukikoshi Mitsuru, Shimbun Kisha, Taguchi Tomorow, Terajima Shinobu, Yonekura Ryoko, Yoshioka Hidetaka. Bookmark the permalink.