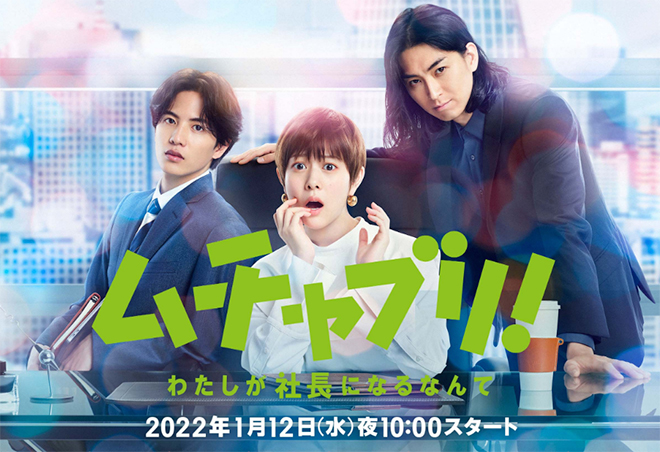 Synopsis
Takanashi Hinako is the personal secretary of Asami Hiroto, the CEO of Relation Gate, a startup that has been growing at a breakneck pace. He is a charismatic man. But he acts on instinct and is prone to giving her a slew of tall orders on a whim. Because of this, there has never been a peaceful day for her. Hinako has not had a boyfriend in six years or time to think about her future before hitting the age of 30. All she can do at the end of each day is let out a long sigh with a beer in one hand and rail, “This isn’t a job worth doing!” However, Hinako gets the tallest order from Asami out of the blue when he announces her appointment as the CEO at a press conference on the establishment of a new subsidiary. He acquired a French restaurant Saison Nouvelle which has been in business for 50 years and the clueless Hinako has to overhaul it within a month. Taiga Ryo, a young and ambitious subordinate who has been assigned to Hinako, is unhappy that his business proposal lost out to hers. They arrive at Saison Nouvelle only to face fierce opposition from its chef Koga Michio and employees who have not been informed of the restaurant’s acquisition. Koga lashes out at Taiga’s suggestion to offer cheaper ala carte dishes instead of course meals to woo more customers, and yet Hinako is not prepared to dismiss him for the restaurant to remain viable. Complicating matters are the “hints of love” in the air as Hinako finds herself caught in the middle of two men with very different personalities – her charismatic boss and impertinent subordinate. But both of them are problematic. How will her romance develop?

Characters
Takahata Mitsuki as Takanashi Hinako
The CEO of Relation Foods. It has been eight years since she joined Relation Gate. She was assigned to the general affairs department’s secretarial section and it is her fourth year as CEO Asami Hiroto’s secretary. Even though he gives her tall orders, she plasters on a smile and gets through it by trying to please everyone. She is suddenly ordered to be the new CEO of a subsidiary called Relation Foods one day and next finds herself having a hard time with an impertinent subordinate. While she wonders why she has been given this role, she throws herself into her work and tackles endless challenges. What lies ahead of these struggles that she has to contend with?

Matsuda Shota as Asami Hiroto
The CEO of Relation Gate. He may be good looking and charming but he is ruthless when it comes to work and issues tall orders with a smile. It is impossible to know what he is thinking. However, there is some aura that is different from pressure that makes it hard to refuse his tall orders. Why did he pick Takanashi Hinako’s business proposal and suddenly select her to be the CEO of Relation Foods? And what is his motive behind that smile?

Shison Jun as Taiga Ryo
A Relation Foods’ employee who is in charge of marketing. Despite being outstanding enough to win a marketing award in his third year working at Relation Gate, he is the type who would believe and act on data rather than people’s feelings. He is unhappy about his sudden secondment to Relation Foods, but adapts to the situation he is in and does his work. He frequently argues and clashes with Takanashi Hinako for some reason. Is this due to jealousy, or something else?

Kaho as Sasakawa Tomomi
Takanashi Hinako’s close friend and former high school classmate. She is someone that Hinako can feel relaxed around. She listens to her complaints and occasionally rouses her with stern advice. She understands her well and is also her confidant.

Yuka as Hiyama Ririko
A freelance management consultant who seems to be Asami Hiroto’s old acquaintance. They speak to each other in an extremely friendly way. What exactly is their relationship?

This blog contains information and musings on current and upcoming Japanese dramas but is not intended to be comprehensive.
View all posts by jadefrost →
This entry was posted in NTV, Winter 2022 Dramas and tagged Kaho, Matsuda Shota, Muchaburi, Takahata Mitsuki, Yuka. Bookmark the permalink.