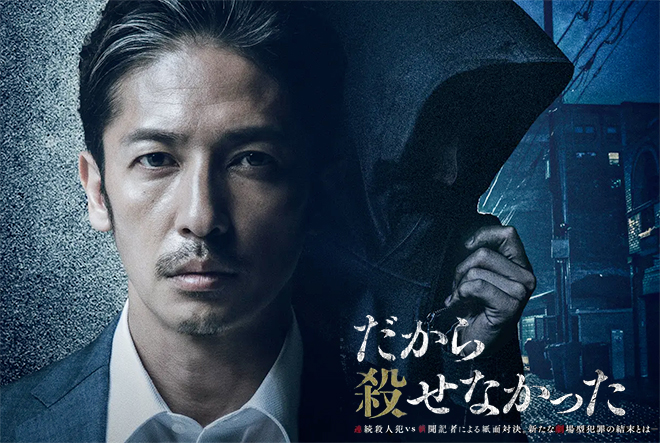 Synopsis
Taiyo Shimbun is facing a slump in circulation figures. Fearing that reporters would become targets for a layoff, the director Yoshimura Ryuichi instructs Ippongi Toru, a roving reporter with the local news desk, to write an article with the theme “crime reporting and families”. Despite his concerns, Ippongi writes about his own harrowing experience 20 years ago. Meanwhile, a letter is delivered to Ippongi from a person who appears to be the criminal behind the serial murders in the Tokyo metropolitan area. “Try stopping my murders with words,” says a line in the letter and the random killings which have shaken the area are described in detail. The criminal demands a public debate with Ippongi in the newspapers. Using a reporter’s power of words, Ippongi goes head to head with the criminal who warns of a new murder if the rules are broken. As Ippongi writes a rebuttal, he plots to initiate contact with Ehara Yoichiro, a suspicious-looking university student who was present at a murder scene. The police proceed to investigate the sender whom they believe to be involved in the murders. At the same time, they suspect Taiyo Shimbun of a charade. The troubled newspaper’s circulation has since rebounded in a V-shaped recovery. This unprecedented dialogue between the serial killer and reporter puts a spotlight on the unsavoury side of journalism and society, and eventually rocks the public.

Characters
Tamaki Hiroshi as Ippongi Toru
A roving reporter with Taiyo Shimbun’s local news desk. He is burdened by the events that happened 20 years ago due to an article he wrote. Using the power of words as a reporter, he confronts the criminal who threatens to commit another murder.

Matsuda Genta as Ehara Yoichiro
A university student. He has been worrying ever since he learned about a family secret. He is seen acting suspiciously by Ippongi Toru in the vicinity of the scenes of a serial murder in the Tokyo metropolitan area.

Hagiwara Masato as Ehara Shigeru
Ehara Yoichiro’s father. He worries about his son Yoichiro who has been in low spirits since his wife passed away. He vigorously protests against Ippongi Toru who suspects Yoichiro.

Furuta Arata as Ishibashi Mitsuo
An enigmatic doctor at a hospital in Gunma. He is an old acquaintance of Ehara Shigeru and his late wife Mutsumi, and sympathetically listens to the couple’s problems.

Takaoka Saki as Ogawa Mariko
A counsellor on psychological matters at the university that Ehara Yoichiro attends. She was Ippongi Toru’s senior in university and a former reporter with the political desk. She listens to Yoichiro’s worries.

Watabe Atsuro as Yoshimura Ryuichi
Taiyo Shimbun’s director who is in charge of the editorial team. He knows about Ippongi Toru’s harrowing experience 20 years ago. He tries to capitalise on the debate between Ippongi and the serial killer in the newspapers to turnaround the newspaper which faces financial difficulties.

This blog contains information and musings on current and upcoming Japanese dramas but is not intended to be comprehensive.
View all posts by jadefrost →
This entry was posted in Winter 2022 Dramas, WOWOW and tagged Dakara Korosenakatta, Furuta Arata, Maekawa Yoichi, Takaoka Saki, Tamaki Hiroshi, Watabe Atsuro. Bookmark the permalink.