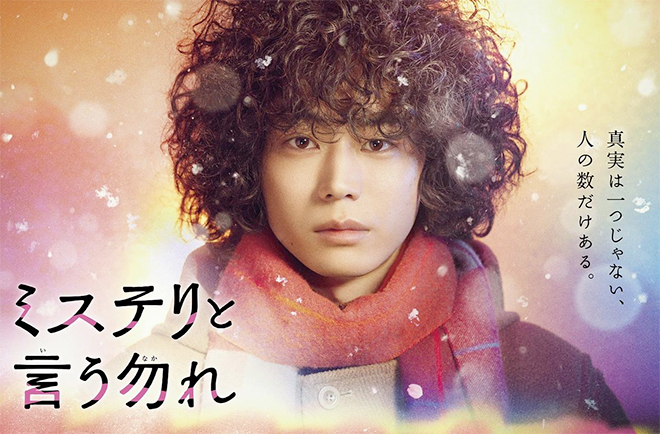 Synopsis
University student Kuno Totono has been making curry in his apartment since morning. The landlord of his apartment appears with detectives Yabu Kanzo and Ikemoto Yuto from Otonari Police Precinct. When asked about his actions last night at 10 pm, he replies that he was making curry alone. Then Yabu informs him that Sagae Ken was found murdered at a park nearby and requests that he come voluntarily to the police precinct for questioning. Totono is questioned by Yabu and Aoto Nariaki. Sagae came from the same high school as Totono and also attended the same university. Witnesses had seen him fighting with Totono at the estimated time of death. That is why the police regard Totono as a suspect. However, he proclaims his innocence matter-of-factly and proceeds to theorise whether the eyewitness reports clearly said that it was him. In the interrogation room the next day, the police are manipulated by Totono who tends to digress from the topic and poke at their contradictions. He even correctly guesses that one of them is troubled about not getting along with the wife and ends up giving advice. However, on the third day, the fruit knife used to kill Sagae is found and Totono’s fingerprints are detected on it … …

Characters
Suda Masaki as Kuno Totono
A university student who is deeply attached to curry. He has no friends or a girlfriend but he does not care at all. He is the type who constantly questions common knowledge that is taken for granted in society and also notices slight incongruities that would usually be overlooked. He will think things through and develop his own theories based on his vast knowledge and unique set of values. As he cannot help talking about ideas that come to mind with whatever happens around him, he keeps getting called noisy and bothersome.

Ito Sairi as Furomitsu Seiko
A rookie detective who originally had strong convictions when she became a police officer. However, she has never been able to stand up for herself in the male-dominated police organisation and feels discourage each passing day. She even thought about resigning at one point. But after meeting Kuno Totono, she was struck by his keen insight and observation skills. She rediscovers the feelings she had when she dreamed of becoming a police officer and starts to develop as a detective.

Kadowaki Mugi as Laika
A mysterious lady whom Kuno Totono encounters at the hospital that he is later admitted to. She has been hospitalised for a long time for some illness and occasionally appears out of nowhere and uses a strange code language to communicate with him. Totono gradually grows fascinated with her and as he figures out the code that she speaks, the two of them begin to understand each other little by little. Her complicated past and despair will soon come to light … …

Tsutsui Michitaka as Aoto Nariaki
A detective with Otonari Police Precinct’s First Violent Crimes Unit. Rank: Inspector. A calm, cool and sharp person who is harsh on himself and other people. He advocates meritocracy. Although he has a lot of trust from his subordinates, he actually has a bitter past where he was demoted for causing someone to be wrongly convicted due to a mistaken arrest. His involvement with Kuno Totono makes him question what his thinking which he has believed to be right so far and he once again confronts the cases of the past.

Endo Kenichi as Yabu Kanzo
A detective with Otonari Police Precinct’s First Violent Crimes Unit. Rank: Assistant Inspector. He prioritises work over his family and private life. In the police precinct, he is called the work demon and the model detective. He lost his wife and only son in an accident. But even on that occasion, he could not leave the investigation scene and attend to them. He firmly believes Kuno Totono is the murderer based on his detective instincts and grills him.

This blog contains information and musings on current and upcoming Japanese dramas but is not intended to be comprehensive.
View all posts by jadefrost →
This entry was posted in Fuji TV, Winter 2022 Dramas and tagged Endo Kenichi, Kadowaki Mugi, Mystery to Iu Nakare, Suda Masaki, Suzuki Kosuke, Tsutsui Michitaka. Bookmark the permalink.