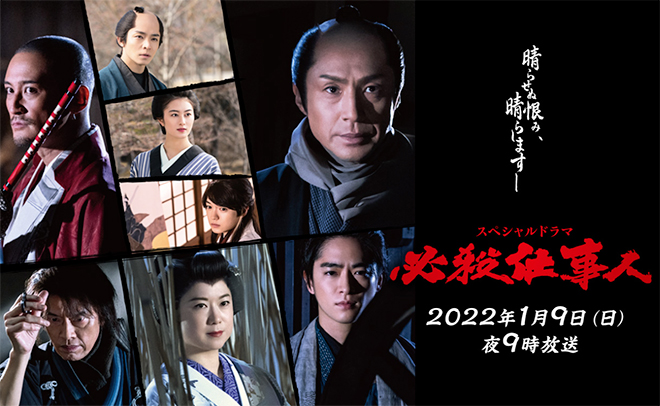 Date: From 9.00 p.m., 9 January 2022
Scriptwriter: Nishida Masafumi (Totone-chan, Jikken Keiji Totori, Yokai Ningen Bem)
Director: Ishihara Shigeru
Cast: Higashiyama Noriyuki, Matsuoka Masahiro, Chinen Yuri, Kishi Yuta, Nishihata Daigo, Matsuo Toru, Namase Katsuhisa, Kimura Midoriko, Nakagoshi Noriko, Takatsuki Sara, Suga Kenta, Kimura Ryo, Sugita Kaoru, Kaneda Akio, Kobayashi Takashi, Haba Yuichi, Wakui Emi, Endo Kenichi
Synopsis: Inokichi (Kishi Yuta), who works under constable Watanabe Shogoro (Higashiyama Noriyuki) of the Honmachi Magistrate’s Office, arrives unannounced looking for him. He is a dedicated, righteous person that Shogoro’s superior Masumura Rintaro (Namase Katsuhisa) assigned after being unable to bear the slack Shogoro. Inokichi has hauled in Kishida Tojiro (Kimura Ryo) who attempted to assault the girls in town. But after taking a look at Kishida’s face, Masumura hurriedly wraps up the matter by giving it over to the magistrate’s office. At the same time, the picture framer Ryoji (Matsuoka Masahiro) is reunited with the painter Saizo (Nishihata Daigo), who is an old acquaintance, through his day job. While Saizo is inarticulate and introverted, his artistic talent is acknowledged by Ryoji too. However, he has a secret passion that Ryoji does not know about. The next day, Inokichi is patrolling the streets of Edo when he sees Tojiro, whom he had apprehended, walking leisurely and cannot hide his surprise. Although he raises this matter to the magistrate’s office, Masumura keeps saying that this was decided after consulting with the superiors. In fact, Tojiro got off scot-free because he is the commissioner of finance Kishida Juemon’s (Kaneda Akio) son. Without any outlet for his anger, Inokichi declares to his younger brother Saizo that there are a legion of bad people virtually unknown to the world. He gets Saizo to draw on the wall of a store that it is selling diluted sake and scrawls words accusing it of wrongdoing. The “graffiti” exposing the liquor store’s misdeeds creates a sensation the overnight as reformation of the world. This is the start of Inokichi and Saizo’s reformation series. At some point, the paintings drawn in the streets in one night come to be called Bankuru. Furthermore, Inokichi ends up becoming the leader of the Yonaoshi-gumi. Seeing Inokichi work diligently, his childhood friend Miyo (Takatsuki Sara), who secretly has feelings for him, also looks happy but … … Not even Shogoro had foreseen that the appearance of Bankuru, which drove the people of Edo into a frenzy, would be the beginning of a new tragedy.
Official Website: www.asahi.co.jp/hissatsu
Twitter: twitter.com/hissatsu_series

This blog contains information and musings on current and upcoming Japanese dramas but is not intended to be comprehensive.
View all posts by jadefrost →
This entry was posted in TV Asahi, Winter 2022 Drama Specials and tagged Endo Kenichi, Higashiyama Noriyuki, Hissatsu Shigotonin Series, Matsuoka Masahiro, Namase Katsuhisa, Wakui Emi. Bookmark the permalink.