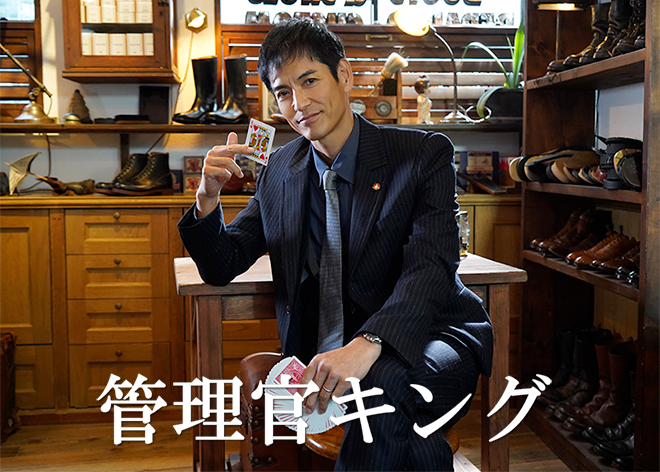 Date: From 8.00 p.m., 6 January 2022
Scriptwriter: Okita Haruka (Radiation House Series, Night Doctor, Good Doctor)
Director: Kamihoriuchi Kazuya
Cast: Sawamura Ikki, Okura Koji, Narumi Riko, Nakamura Aoi, Kuninaka Ryoko, Kohinata Fumiyo, Okada Kenshi, Asano Kazuyuki
Synopsis: The alumni of a famous high school’s golf club are gathered at a seaside restaurant for the farewell party of an adviser who has reached retirement age. One of the attendees, a houseman Hirayama Yuta (Okada Kenshi), falls from the terrace into the sea. Upon receiving an emergency call, detectives Nihei Jiro (Okura Koji) and Miyama Chiaki (Narumi Riko) from the Second Section of the Tokyo Metropolitan Police Department’s First Investigation Division, arrive at the scene. They learn that Yuta survived because he was treated by a doctor friend, who attended the party with him. However, he is unconscious. It is concluded from the statements given by the attendees and security camera footage that it was an accident. As the investigators leave, Director Ouga Toichi (Sawamura Ikki) shows up late and silently observes the scene. Convinced that Yuta’s fall was not an accident, Ouga starts investigating the possibility of attempted murder at his own discretion. Ouga is an oddity who is mocked “King” behind his back for persisting in having his own way and ignoring the opinions of the people around him. Defying the instructions of his superior, he coerces Nihei and Chiaki to participate in the investigation. Meanwhile, Yuta regains consciousness. Although he insists that he fell into the sea because he was drunk, Ouga is somehow unconvinced. He calls Nanase Kaori (Kuninaka Ryoko) from the crime lab and inspects the scene again. They find conclusive evidence that support the criminal nature of this case. Okumura Aoi (Kawashima Ririka), a female student who was the only one at odds with the kind and always mild-mannered Yuta back in high school, suddenly surfaces. Ouga instructs Aoi to check up on Aoi. Although Chiaki is unhappy about being always at his beck and call day after day, Hosho Eito (Nakamura Aoi), her boyfriend who is a lawyer, proposes that she assist in the investigation. However, on that day, Chiaki receives an email threat to stop searching for Aoi. In addition, Yuta’s classmates are attacked in swift succession after that. Ouga, Nihei and Chiaki wonder if these are serial murders targeted at the golf club alumni. As they proceed with the investigation, Ouga grows confident that there is a big mastermind who is nothing less than the Joker behind the series of mysterious events.
Official Website: www.tv-asahi.co.jp/kanrikanking
Twitter: twitter.com/tv_asahi_PR/

This blog contains information and musings on current and upcoming Japanese dramas but is not intended to be comprehensive.
View all posts by jadefrost →
This entry was posted in TV Asahi, Winter 2022 Drama Specials and tagged Kanrikan King, Kohinata Fumiyo, Kuninaka Ryoko, Narumi Riko, Sawamura Ikki. Bookmark the permalink.