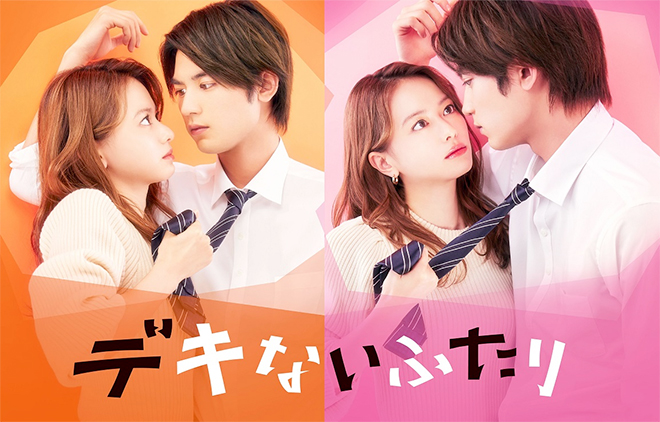 Date: From 12.15 a.m., 4 January 2022
Original Work: Dekinai Futari by Satomura
Scriptwriter: Okita Haruka (Radiation House Series, Night Doctor, Good Doctor)
Director: Yuasa Hiroaki
Theme Song: Aa, Mou by Saucy Dog
Cast: Yamamoto Maika, Itagaki Mizuki, Shiono Akihisa, Takano Akira, Tsuna Keito, Noro Kayo
Synopsis: Shirafuji Nao (Yamamoto Maika) works for a web advertising company’s sales department. When she meets her department colleague Kurose Takahito (Itagaki Mizuki), they would exchange a stream of insults. The two of them keep arguing every day. Even though they are rivals who compete with each other on sales performance, there is a reason for the bad blood between them that astonishes their colleagues. Nao and Kurose dated back in high school and he was the first person she ever slept with. However, they broke up in the worst way possible due to a brief comment that he said at the time. Those words have traumatised Nao since then and she has not been able to have a decent romance. Even when she dated Konno Kenta (Takano Akira), they immediately ended things. A reluctant Nao has to team up with Kurose to participate in a competition for a large-scale project. Despite arguing back and forth as always, the amount of time they have to spend together increases and Nao feels shaken by his occasional smiles and words. Kurose, on the other hand, is bothered by designer Kaneshiro Toma (Shiono Akihisa) who starts talking and getting close to her … … Nao and Kurose slowly begin to show a subtle change of heart. One night, Nao is working alone in the office, Kurose shows up. She thought that he would start making sarcastic comments like usual. But in the next moment, he suddenly covers her eyes and kisses her! This gesture marks a turning point in their relationship and the time that had stopped for the two of them for seven years is set in motion.
Official Website: www.tv-asahi.co.jp/dekihuta
Twitter: twitter.com/telasa_drama

This blog contains information and musings on current and upcoming Japanese dramas but is not intended to be comprehensive.
View all posts by jadefrost →
This entry was posted in TV Asahi, Winter 2022 Drama Specials and tagged Dekinai Futari. Bookmark the permalink.