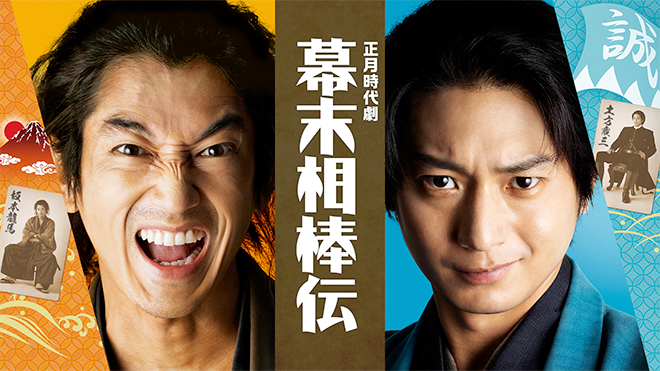 Date: From 9.00 p.m., 3 January 2022
Original Work: Aibou by Igarashi Takahisa
Scriptwriter: Dobashi Akihiro (13-nin no Shikaku)
Director: Horikirozono Kentaro
Cast: Nagayama Eita, Mukai Osamu, Sato Ryuta, Shirasu Jin, Hotta Mayu, Asari Yosuke, Okuno Eita, Wada Masato, Abe Ryohei, Tanida Ayumi, Suruga Taro, Watanabe Dai, Kondo Yoshimasa, Sugimoto Tetta, Nakamura Baijaku
Synopsis: A single bullet cuts through Kyoto in the last days of the Tokugawa shogunate right before the restoration of imperial rule. Who plotted to assassinate Tokugawa Yoshinobu (Watanabe Dai), who is about to become the last shogun of Japan? Was it the faction wanting to overthrow him or the rebels within the shogunate? Mutual enemies Sakamoto Ryoma (Nagayama Eita), the wandering samurai, and Hijikata Toshizo (Mukai Osamu), a deputy commander of the Shinsengumi and vassal of the Tokugawa clan, receive a secret order to track down the culprit. They are given a mere two days. Ryoma dreams of creating a new country for the people and desperately tries to stop the battle between those for and against the shogunate which has polarised the country. Hijikata is forced to team up with Ryoma after the Shinsengumi are accused by Nagai Naoyuki (Sugimoto Tetta), an official who supports the shogunate, of providing inadequate protection in the attack on the shogun. If the criminal is not found and the restoration of imperial rule does not come into effect, the battle with the faction wanting to overthrow Yoshinobu would be unavoidable. Despite the conflict between Ryoma and Hijikata, they carry out a daring search against Saigo Takamori (Tanida Ayumi), Katsura Kogoro (Suruga Taro), Iwakura Tomomi (Nakamura Baijaku), men who would go on to be key figures in the Meiji Restoration. Will the two of them be able to locate the mastermind and successfully put a stop to the war?
Official Website: www.nhk.jp/p/ts/3K4QPLPQRV

This blog contains information and musings on current and upcoming Japanese dramas but is not intended to be comprehensive.
View all posts by jadefrost →
This entry was posted in NHK, Winter 2022 Drama Specials and tagged Bakumatsu Aibou-den, Eita, Mukai Osamu, Nakamura Baijaku. Bookmark the permalink.