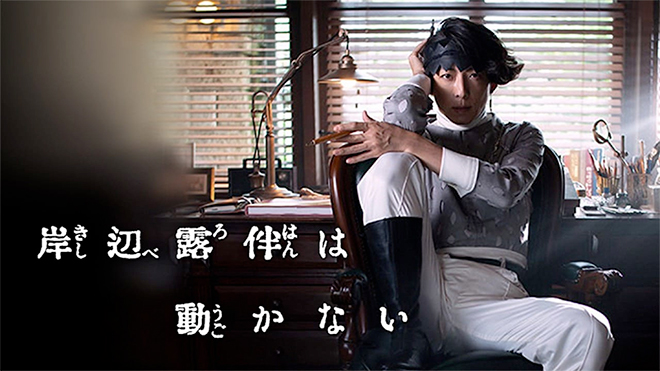 Episode 4: The Run
Synopsis: Manga artist Kishibe Rohan (Takahashi Issei) meets a young man called Hashimoto Yoma (Kasamatsu Sho) at a members-only sports gym. Yoma is starting out as a model and has been going to the gym after being instructed by the head of his modelling agency to build up his body. He comes across as a lethargic and elusive person. But from this day onwards, Yoma seems to get absorbed in running and his fixation with running gradually starts to go overboard. One day, Yoma appears before Rohan for the first time in a long while. Going to the gym seems to have made a difference and he is now full of confidence. He proposes to Rohan that they have a running match using a machine.
Cast: Takahashi Issei, Iitoyo Marie, Kasamatsu Sho

Episode 5: Senaka no Shoumen
Synopsis: Kinoto Masazo (Ichikawa Ennosuke), a man who works for the sales department of the company that undertakes the planning and development of resort destinations, comes to visit Rohan (Takahashi Issei) in an attempt to buy back the mountain that he had acquired. When Kinoto is invited into the house, he creeps inside with his back against the wall. Even when he takes off his shoes, sits on the chair, drinks tea, or responds with a polite smile, he always tries not to show his back to Rohan. His peculiar behaviour greatly arouses Rohan’s curiosity. Using his wiles, Rohan manages to see Kinoto’s back against the man’s will. After that happens, something unusual strikes Kinoto and this strange phenomenon soon overcomes Rohan too … …
Cast: Takahashi Issei, Iitoyo Marie, Ichikawa Ennosuke

Episode 6: Mutsukabezaka
Synopsis: Rohan (Takahashi Issei) has put all his money into the mountain and forest of Mutsukabezaka just to gather information on a spirit legend and ends up bankrupt. Getting clues in more important to him than his fortune. He visits the village with his editor Izumi Kyoka (Iitoyo Marie) in pursuit of the legend but cannot find any clues. That is when Osato Naoko (Uchida Rio), the daughter of the village’s most distinguished family, appears. She is the heiress of the family’s 300-year-old miso business. She probes for the reason behind Rohan’s visit to the village, but she seems to be hiding something herself. Rohan reads her memories using Heaven’s Door and learns the shocking truth related to her and Mutsukabezaka.
Cast: Takahashi Issei, Iitoyo Marie, Uchida Rio

This blog contains information and musings on current and upcoming Japanese dramas but is not intended to be comprehensive.
View all posts by jadefrost →
This entry was posted in NHK, Winter 2021 Drama Specials, Winter 2022 Drama Specials and tagged Iitoyo Marie, Kishibe Rohan wa Ugokanai, Takahashi Issei. Bookmark the permalink.