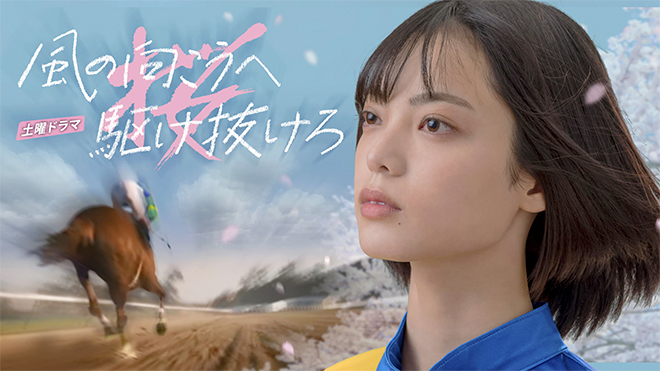 Synopsis
Rookie jockey Ashihara Mizuho’s father Kazuki ran a farm for retired horses but passed away after the earthquake. After that, she graduated from the Japan Racing Association’s horse racing school and made her professional debut. However, she agonised over her performance which stagnated. Midorikawa Stables at the Suzuta Racecourse in the countryside takes Mizuho in. The stables are run-down and it seems on the verge of going out of business. The stables is a gathering place for people said to be useless elsewhere. There is an unmotivated trainer Midorikawa Koji, obstinate and rigid veteran stable hands as well as a young stable boy Kizaki Makoto who is gentle with horses but has shut his heart to people. Even when Mizuho makes her debut again as a jockey in the local races at Suzuta Racecourse, her performance does not improve. Meanwhile, the horses at Midorikawa Stables are being withdrawn due to a dispute between a horse owner and Mizuho.

Characters
Hirate Yurina as Ashihara Mizuho
A female jockey who has been in contact with horses for as long as she can remember. Although she graduated at the top of the horse riding school, she has made little progress after her debut at the Japan Racing Association’s tracks. When she arrives at Suzuta Racecourse in the countryside, she works hard to prove herself superior to the people who looked down on her father who died without fulfilling his goals. However, through her encounter with Midorikawa Koji and the others, she learns that there are people who will fight with her. This frees her from the past and she ventures into the races for their sakes.

Nakamura Aoi as Midorikawa Koji
A horse trainer at Midorikawa Stables. He is a former star jockey who won the G1. However, he retired due to allegations of match-fixing and became a trainer who leads a stable with a hopeless bunch which has come to be called the place for drifting scraps of seaweed. Ashihara Mizuho’s single-mindedness restores his hopes.

Itagaki Rihito as Kizaki Makoto
A handsome young stable hand at Midorikawa Stables. He has lost his voice and is extremely unfriendly and reticent. He takes care of the horses more diligently than everyone else. Owing to that, he is able to detect whether the horses are not in good form. He gradually regains his confidence and voice after Ashihara Mizuho’s appearance.

Okuno So as Sasamoto Takashi
A super rookie of Japan Racing Association who is of Ashihara Mizuho’s generation. Although he treats her harshly at the horse racing school because he is serious, he warmly accepts her as she makes an attempt at the Oka trial race.

Ishii Masanori as Oizumi Yukimasa
A public relations staff of Suzuta City’s Horse Racing Department. Desperately trying to liven up and protect Suzuta horse racing, he orchestrates a plan for Ashihara Mizuho to be dressed in a racing uniform with roses to create buzz. He is slightly out of step but has a strong desire to protect the race track.

Goriki Ayame as Sawada Naomi
The owner of the horse called Bellefontaine. A tough and ambitious woman. She hopes Bellefontaine can become a horse at the Japan Racing Association’s races. She is cold to Ashihara Mizuho but she loves race horses from the bottom of her heart.

Ikeuchi Hiroyuki as Tsukushi Hisaaki
The third-generation owner of a company which runs an extensive business mainly in real estate in Suzuta City. He controls the city. A race horse owner who loves women. Ever since a fight he had as a result of his attempt to sexually harass Ashihara Mizuho, he has treated Midorikawa Stables as an enemy.

Tamayama Tetsuji as Ashihara Kazuki
Ashihara Mizuho’s late father. He worked at a farm that produced thoroughbreds. Even after the horse Sigiriya that was active in the G1 retired, he ran a farm for retired horses to take care of it. His love for horses later motivates Mizuho to become a jockey.

Okuda Eiji as Yamana Ryuichiro
The chairman of Yamana Motors, a large corporation in Suzuta City. After his beloved horse Sigiriya retired and Ashihara Mizuho’s father Kazuki passed away, he withdrew from horse racing. He is concerned about Mizuho who has become a jockey and supports her behind the scenes.

This blog contains information and musings on current and upcoming Japanese dramas but is not intended to be comprehensive.
View all posts by jadefrost →
This entry was posted in NHK, Winter 2022 Dramas and tagged Kaze no Mukou e Kakenukero. Bookmark the permalink.