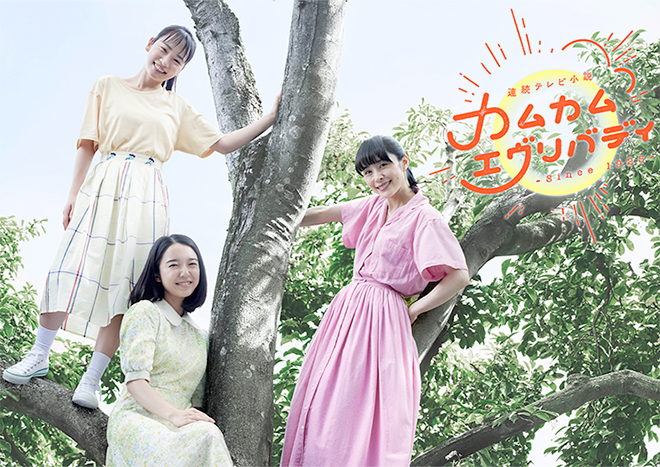 Synopsis
The first radio broadcast in Japan started on 22 March 1925. On that day, a girl named Yasuko is born to Tachibana Kinta and Koshizu who owned a Japanese-style confectionary shop at a shopping street in Okayama City. She grew up in a warm family surrounded by the sweet scent of red bean paste, and hopes that her family will remain happy. But as war approaches, various tribulations befall Yasuko. However, her encounter with an English language radio programme paves the way for a new future. After losing her husband Minoru in the war, she has no choice but to leave her daughter Rui and go to America. Kijima Rui hates her parents and English. But she is saved by jazz songs and builds a life for herself in Osaka from the 1950s. Rui’s daughter Hinata in Kyoto from the mid-1960s adores the world of period dramas but finds a place where she can be herself through the English language programme on the radio after going a long way round. As Yasuko, Rui and Hinata listen to English lessons over the radio, it opens the door to their dreams in a story spanning the Showa, Heisei and Reiwa eras.

Characters
Kamishiraishi Mone as Tachibana Yasuko
Born to Tachibana Kinta, the second-generation owner of a Japanese-style confectionary shop in a shopping street in Okayama City, and his kind-hearted wife Koshizu, she becomes the shop’s poster girl. A very ordinary girl who has a great love for red bean paste and fashion. She begins learning English because of a radio programme.

Matsumura Hokuto as Kijima Minoru
A eldest son of Kijima Senkichi, the boss of Kijima Textile. He is a university student who is proficient in English and has his sights on expanding the family’s textile business overseas. An encounter with Minoru sets Tachibana Yasuko’s fate in motion.

Fukatsu Eri as Kijima Rui
Tachibana Yasuko’s daughter. She grew up in Okayama until the age of 18. Wanting to be herself and live freely for a certain reason, she moved to Osaka. She makes the acquaintance of a married couple who run a laundry shop, and begins a new life with a live-in job. She is a hard worker who does work promptly. She quickly becomes the shop’s poster girl. Once she has made up her mind, she sticks to her decision – a trait which she inherited from her mother.

Kawaei Rina as Hinata
Kijima Rui’s daughter and the granddaughter of Tachibana Yasuko. She is pampered and gets bored of things easily. Drawn to the world of period dramas, she finds a place where she can be herself through the English language programme on the radio after a detour.

Murakami Nijiro as Kijima Isamu
Kijima Minoru’s younger brother and Tachibana Yasuko’s classmate since elementary school. He plays baseball and aspires to compete in the Koshien baseball championship. He respects his older brother. Maybe he likes Yasuko but he just cannot be honest about his feelings and is always flirting with her.

Odagiri Joe as Otsuki Joichiro
Nicknamed Joe, he is mysterious man who visits the laundry shop where Kijima Rui works as a customer. He quickly disappears without her knowing his name nor his address. He always has the same stain on his shirts and leaves a lot of laundry. Although his vague words and actions bewilder Rui, her encounters with him eventually begins to change her destiny.

This blog contains information and musings on current and upcoming Japanese dramas but is not intended to be comprehensive.
View all posts by jadefrost →
This entry was posted in Fall 2021 Dramas, NHK, Winter 2022 Dramas and tagged Come Come Everybody, Fukatsu Eri, Kamishiraishi Mone, Nishida Naomi. Bookmark the permalink.