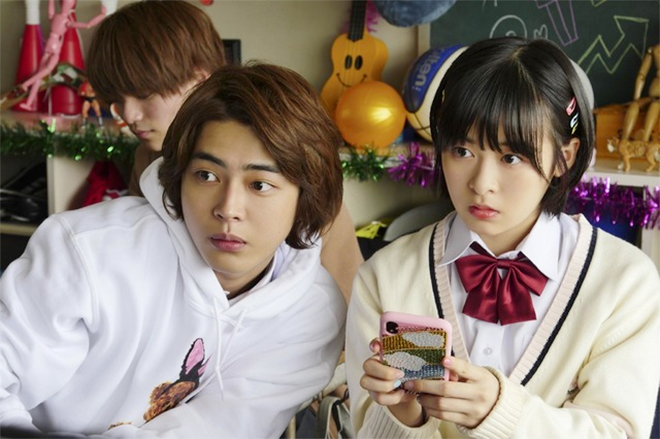 Yuutousei
Story: Miyamoto Asuka (Mori Nana), a silly student, attends the high school with the lowest standard deviation score in the prefecture. Concerned about the low score, the school’s teachers conduct small, easy tests on general knowledge each morning in an attempt to improve the students’ performance. Asuka scores her class’ first zero in these small tests. But she is not sorry at all and uses it as a joke to get laughs from classmates. The next morning, Asuka happens to find a small shrine in a dimly lit alley as she goes to school. She puts her hands together at the strange shrine to wish that she will be able to score 100 in the small test this morning.
Cast: Mori Nana, Okudaira Daiken, Kura Yuki, Oishi Masayoshi

Skip
Story: Okura Mikio (Akaso Eiji) has been leading a dull university life. He likes his schoolmate Fujino Ayaka (Hori Miona), who is the university’s beauty, but he has difficulty even speaking to her and he finds his days mundane. One day, Mikio picks up a key with a familiar symbol on his way home from school. This key is for a closed door in the family home. He had been told by his grandmother when he was a child, “Never go inside. Once you enter, you won’t be able to get out.” However, Mikio is seemingly fascinated by the key and ends up opening the door despite the air of disquiet. This decision causes a drastic change in his life … …
Cast: Akaso Eiji, Hori Miona, Sakaguchi Ryotaro, Tokito Yuki, Yanagi Shuntaro

Fukkatsu no Jumon
Story: Nakaoka Kenichi (Kiritani Kenta) is tidying up the family home with his son Yuki (Sasaki Yura) when he finds a game console and the game Dragon Quest II ~ Akuryo no Kamigami. This game has a piece of paper with Fukkatsu no Jumon written in hiragana characters on it. Yuki takes the opportunity to type Fukkatsu no Jumon and while he is playing the game, an elementary school student appears out of nowhere. Kenichi thinks this is Yuki’s friend and lets it be but he cannot shake off the feeling of strangeness that has come over him. He casually takes a look at his graduation album and spots the elementary school student who had played with Yuki a while ago. This student is Ryosuke (Ishida Seira), a friend whom Kenichi had played with when he was in elementary school and died in a nearby river in fifth grade. Kenichi is very shaken by this unthinkable situation and launches Dragon Quest II in order to see Ryosuke again.
Cast: Kiritani Kenta, Nonami Maho, Ishida Seira, Sasaki Yura

Kin no Tamago
Story: Housewife Ichinose Ami (Yamaguchi Sayaka), her husband Katsuaki (Hasegawa Tomoharu) and their daughter Yuko (Ono Rina) are a family of three. She comes back from shopping at a supermarket one day and takes out a box of eggs that were on sale from her bag. Noticing that they are cracked, she gets a shock. Ami tries to peer inside out of curiosity and sees a golden light through a gap and a “golden egg” with a dull glow appear. The next morning, she is cleaning up after breakfast when she sees a happy person on TV declare, “I just bought eggs but I won a trip around the world!” Ami is reminded of the “golden egg” yesterday. That night, Katsuaki’s project at work gets through a competition. He receives a cash reward and returns home in a jubilant mood. In addition, Ami realises that she bought a winning lottery ticket. A string of lucky incidents happen around her because of the “golden egg” that she had obtained by chance at the supermarket. As a result of this egg, Ami becomes obsessed with this mystical power.
Cast: Yamaguchi Sayaka, Hasegawa Tomoharu, Ono Rina

This blog contains information and musings on current and upcoming Japanese dramas but is not intended to be comprehensive.
View all posts by jadefrost →
This entry was posted in Fall 2021 Drama Specials, Fuji TV and tagged Kiritani Kenta, Yo ni mo Kimyouna Monogatari Series. Bookmark the permalink.