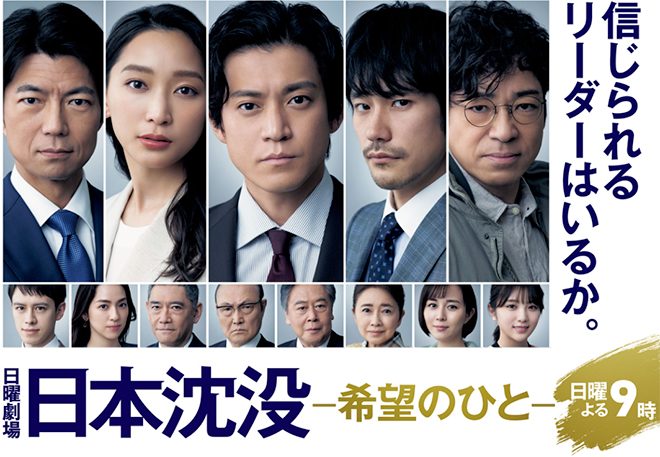 Synopsis
It is the year 2023 in Tokyo. Prime Minister Higashiyama Eiichi declares that he will make a further push for COMS under Professor Sera Toru, a leading authority on geophysics, at an international conference on the environment. COMS liquifies pollutants and collects it in the gaps in the layers of the seabed. He also sets up a council for the promotion of Japan’s future which brings together outstanding young bureaucrats from various ministries and agencies. Amami Keishi from the Ministry of Environment and Tokiwa Koichi from the Ministry of Economy, Trade and Industry have been selected to be members of this council. Amami is willing to use aggressive tactics to achieve his goals and ingratiates himself with Higashiyama in order to push his own proposal through. At the same time, he tries to win over Deputy Prime Minister Satoshiro Gen, who is Higashiyama’s opponent and the kingmaker in politics. He also seeks an introduction to Ikushima Makoto, the chairman of Keidanren who has influence on both men, from Tokiwa and gets close to him. Meanwhile, Tadokoro Yusuke, a former Tokyo University professor and maverick in Japan’s geophysics community, publishes an article online to raise the alarm about the possibility of the Kanto region sinking. As a result, several groups take to the streets to demonstrate. Amami meets Tadokoro in an attempt to settle the situation. However, Tadokoro refuses to listen and instead makes an ominous prediction. In the near future, the islands off Izu Peninsula will sink and this will be a precursor to the sinking of the Kanto region. Around the same time, Amami is confronted by Shiina Minori, a journalist from a weekly magazine called Sunday Maichou, about groundless allegations of collusion between D Plans, a company in the environmental business, and the Ministry of the Environment. Despite the tinge of anxiety that he feels, Amami goes on a scuba diving trip with Tokiwa. However, they encounter an earth-shattering incident … …

Characters
Oguri Shun as Amami Keishi
A bureaucrat from the Ministry of Environment. An incident in high school spurred him to tackle environmental issues all the more. He is an ambitious young man who is willing to do what it takes for the greater good and uses strong-arm tactics to press ahead with policies. Together with his university schoolmate Tokiwa Koichi, he participates in an important position in the COMS project that was kickstarted by Prime Minister Higashiyama Eiichi. Through Ishizuka Taira’s introduction, he becomes a member of the council for the promotion of Japan’s future. He had aimed to become a politician some day. However, he is faced with a big decision that will determine the country’s fate after encountering Professor Tadokoro Yusuke.

Matsuyama Kenichi as Tokiwa Koichi
A bureaucrat from the Ministry of Economy, Trade and Industry. His father is the CEO of a large company which manages multiple companies. He chose to avoid being in the highly competitive industries and support them as a government official. He has a lot of influence in political and business circles and also has a connection with Ikushima Makoto, the chairman of the powerful Japanese business federation known as Keidanren. He and Amami Keishi joined the swimming club at the same time during their days at Tokyo University and the two of them still recognise each other. He works with Amami to introduce influential business people to back the COMS project. He becomes the head of the council for the promotion of Japan’s future and ends up clashing with Amami due to conflicting opinions.

Anne as Shiina Minori
A journalist with the weekly magazine Sunday Maichou. She is friendly and composed but has a strong sense of justice and is conscious of the country’s various problems such as the declining birth rate, unequal society and fake news. Although she used to be a political correspondent with Maichou Shimbun, she was transferred to the affiliated weekly magazine on the grounds that she stood out for her aggressive attitude when covering stories and selective critical assertions. She is aiming for a huge scoop in order to go back to being a newspaper journalist. She makes the acquaintance of Amami Keishi while gathering information with the intention of exposing the corruption of the Ministry of Environment which has cozy relations with D Plans which runs a fraudulent environmental business. At first, she views Amami with suspicion but they gradually build a relationship of trust. She lives with her mother Kazuko.

Nakamura Toru as Higashiyama Eiichi
The Prime Minister. He is popular with the public and enjoys a high approval rating due to his polite and easily understandable phrases and stance. Despite showing a willingness to solve various problems, his faction is so weak that he has to rely on the conservative forces to secure approval within the party. He practically cannot move forward without the consent of Satoshiro Gen, his deputy who also leads the largest of these factions. Although he takes Japan’s future seriously, his weakness is that he has to serve their personal interests and cannot force his hand. In order to overcome the current situation, he selects one young elite bureaucrat from each ministry and sets up an advisory council to discuss policies on the country’s future.

Kagawa Teruyuki as Tadokoro Yusuke
A seismologist who is a maverick in the field of geophysics in Japan. He used to be a professor at Tokyo University. Ever since he developed an interest in global warming, he has been devoted to research and not published any thesis. He was ousted from Tokyo University for diverting budget because he wanted research funds. He spent some time abroad but came back to Japan after the Great East Japan earthquake and began research on earthquakes. Seeing the terrible air and marine pollution after the earthquake, strengthened his fears of environmental destruction by humans and he immersed himself in research as if he were possessed. In the process, he noticed the rise in sea level and high frequency of large typhoons, and COMS cause the distortion of the seafloor plate off the coast of Izu Kanto, resulting in the possibility of the Kanto region sinking.

Kunimura Jun as Sera Toru
A professor in geophysics from Tokyo University who is the top authority on Japan’s geophysics. He has been regarded as a leading figure in the field from a young age but this position was stolen by his junior Tadokoro Yusuke who had a breakthrough achievement and he tasted humble pie. As he had foreseen the Great East Japan earthquake early on and raised the need for the construction of breakwaters, he firmly established his position and became someone whom the political and business establishment sought opinions from. He vouches for the safety of the COMS project led by the Prime Minister and rejects Tadokoro’s theory about the sinking of the Kanto region outright.

Higa Manami as Amami Kaori
Amami Keishi’s wife. They come from the same hometown and she was his junior back in high school. It was not until they both came to Tokyo that they officially started dating. She used to be like her husband and put her career first. But after she gave birth to their daughter Akane, she began to prioritise life with her. Since he neglected the family and did not help with bringing up their daughter, she felt that their love had begun to wane. They have been living separately for the last 18 months. She has been taking care of Akane while doing translation work.

This blog contains information and musings on current and upcoming Japanese dramas but is not intended to be comprehensive.
View all posts by jadefrost →
This entry was posted in Fall 2021 Dramas, TBS/MBS and tagged Anne, Kagawa Teruyuki, Kunimura Jun, Matsuyama Kenichi, Nihon Chinbotsu, Oguri Shun. Bookmark the permalink.