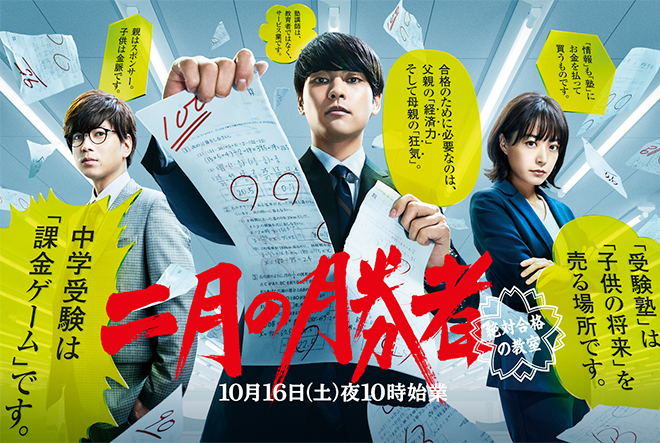 Synopsis
It is the day of the junior high school exam in February. The charismatic teacher Kuroki Kurodo from a prestigious cram school which boasts the country’s best record of qualifying students, is standing at the main gate of the exam venue without an umbrella as the snow falls. A stream of cram school teachers including Sakura Mai, who is under training at the mid-sized Oka Seminar, have come to give support to the students sitting for the exam. As they are seeing the students off into the venue, a student from Oka Seminar is panic-stricken after forgetting a science formula. However, Sakura is unable to answer the question as she is in charge of arithmetic. Kuroki who is next to a flustered Sakura coolly gives the formula. The visibly relieved student enters the venue and Sakura thanks Kuroki. But he scathingly says before he leaves that he is unable to understand what Oka is doing by sending an instructor in training to support students and making a student panic. Two weeks later, it is a new school term at Oka Seminar’s Kichijoji School and Kuroki of all people arrives as its new principal. He tells the parents who have gathered for a briefing session on enrolling at the cram school, “Junior high school exams are not easy. Those who aren’t prepared will leave the venue.” As he shocks many parents with the brutal reality about exams, he makes a promise to everyone that they will get into their school of first choice. This impressive speech turns all the participants at the briefing session into enrolment candidates. Meanwhile, Sakura has officially become an instructor at Oka Seminar but Kuroki is merciless to the instructors. She begins each day swayed by his extreme words and actions which repulse her. However, she is always no match for him.

Characters
Yagira Yuya as Kuroki Kurodo
A super cram school instructor who is brought in from the industry’s well-known and largest junior high cram school to be the principal of the struggling mid-sized Oka Seminar. As soon as he comes on board, he quickly declares to all the new sixth grade students that he will get them into their school of first choice. He creates controversy with his assertion that cram schools are a service business and place which sells children’s future. However, he is an ultrarealistic person who expresses his true feelings and is able to see straight through to the true nature of each student and also ease parental anxieties.

Inoue Mao as Sakura Mai
A newly appointed instructor who has been hired by Oka Seminar’s Kichijoji School. She has experience teaching junior high school and opposes the hard-nosed Kuroki Kurodo’s remarks and instructions one way or another. However, she is no match for his talent. She became a junior high teacher because she admired teachers since childhood. However, she dropped out as a teacher in the wake of some incident. This time, she grows through her encounter with Kuroki and experience at this cram school.

Kato Shigeaki as Haitani Jun
A top instructor at the very well-known cram school for junior high school entrance exams. Kuroki Kurodo’s former junior. He used to respect and admire Kuroki who quit all of a sudden without saying a word. He is baffled by Kuroki’s move to Oka Seminar and accuses him of betrayal. In order to find out Kuroki’s real intentions and true objectives, he stirs things up for him.

Ikeda Tetsuhiro as Tachibana Yusaku
A full-time instructor with Oka Seminar. He is the form teacher of Class 6Ω and in charge of arithmetic and science. He is unhappy with Kuroki Kurodo’s policy on instructing students and pushes back. He even has a tendency of complaining in the teachers’ room and drinking area. His children are still young and he cherishes his family.

Takiuchi Kumi as Katsura Utako
A full-time instructor with Oka Seminar. She is the form teacher of Class 6A and in charge of Japanese language and social studies. She is familiar with the school’s situation and gives advice to Sakura Mai and becomes her confidant. Even though she questions Kuroki Kurodo’s way of thinking and policies, she empathises and tries to understand him.

Kishibe Ittoku as Shiroyanagi Tokumichi
The CEO of Oka Seminar. He brings in Kuroki Kurodo to be the principal of the Kichijoji School and hires Sakura Mai as an instructor after just one interview. Even the typically high-handed and unbeatable Kuroki completely submits to him. He seems to be haphazard but at times there is a sharp gleam in his eyes.

This blog contains information and musings on current and upcoming Japanese dramas but is not intended to be comprehensive.
View all posts by jadefrost →
This entry was posted in Fall 2021 Dramas, NTV and tagged Inoue Mao, Kishibe Ittoku, Nigatsu no Shousha, Yagira Yuya. Bookmark the permalink.