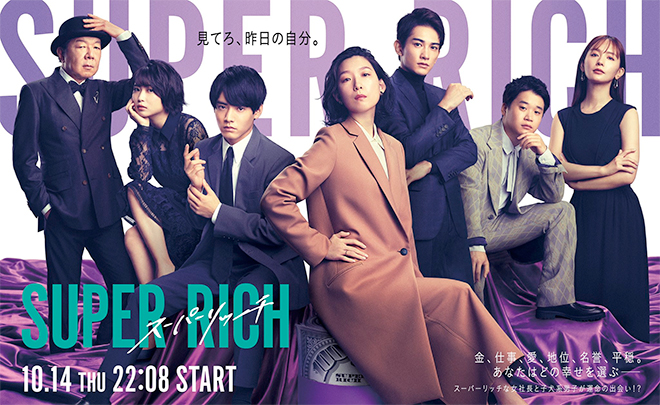 Synopsis
Hyoga Mamoru is the CEO of an e-book start-up called Three Star Books and has even won the Platinum Woman of the Year award for female entrepreneurs. Born into a wealthy family, she has never experienced financial difficulties. Mamoru believes that money can solve anything and works hard every day to make more profit. However, she has built an emotional wall due to her loneliness and sadness over the deaths of her parents when she was a child. She is starved of love despite having all the money. While she is blessed with capable subordinates including her Chief Human Resources Officer Miyamura Sora, the only person she trusts is her co-CEO Ichinose Ryo whom she met during her university days. They started Three Star Books and still work together. The start-up is her life but she starts to face a series of crises that threaten to shake up the company’s management as she works on growing the business. One day, Mamoru has a surprising encounter with Haruno Yu, a vocational school student who applied to be an intern at Three Star Books in a bid to change his life. He was late for the employment test and begs her for another opportunity but she refuses him. That night, Mamoru meets her former boss Shimatani Satomi, the CEO of a major IT company, who cautions her not to be swayed by emotion when making decisions. Haruno visits Mamoru again after that. He has a loving family, that includes his parents and a younger sister Mako, but their financial situation has not been good for many years. Like the warmth of spring, Yu’s smile and friendliness begins to thaw Mamoru’s heart which is frozen like ice because she has been so swamped with work.

Characters
Eguchi Noriko as Hyoga Mamoru
The CEO of Three Star Books. Born into a wealthy family, she has never experienced financial difficulties. She believes believes that money can solve anything and works hard every day to make more profit. However, she has kept her heart close due to her loneliness and sadness over the deaths of her parents when she was a child, and is starved of love. Three Star Books is her life and she works hard every day to build up the company.

Akaso Eiji as Haruno Yu
A vocational school student who applied to be an intern at Three Star Books. He is 12 years Hyoga Mamoru’s junior and comes from a loving family of four that includes his parents and a younger sister Mako. However, the family’s financial situation has been dire for years and he enrolled in a vocational school in Tokyo in order to learn a trade. He somehow gets by on the pay from his part-time work. Then he learns that Three Star Books is recruiting interns without regard for academic qualifications and decides to apply. He has unshakeable will combined with drive, and at times he takes bold action that also surprises Mamoru.

Totsugi Shigeyuki as Ichinose Ryo
The co-CEO of Three Star Books. He has had a big influence of Hyoga Mamoru’s life. They met in university and he gained her trust with his affability and soft tones. After graduation, the two of them founded and grew the company. He does not care about money because he has been living a good life since young. He has focused on investments in order to grow the company even bigger but the executives have misgivings over his methods. However, he has earned Mamoru’s trust and she will approve an investment plan even if it is a little bit of a stretch. Because of that, there are even rumours that the two of them may be dating.

Machida Keita as Miyamura Sora
The Chief Human Resources Officer of Three Star Books and also Hyoga Mamoru’s secretary. A dependable and cool guy whose respect and loyalty for Mamoru surpasses everyone else, and he is also highly trusted by her. As a result, he is called her loyal dog by the people around him. His devotion to her is connected to some incident in the past. He works smart and is also gentle-manned. He takes care of the interns and is like an older brother to them. However he is wary of Haruno Yu who idolises Mamoru and frequently treats him harshly.

Shida Mirai as Tanaka Ririka
An intern at Three Star Books. A confident and competitive university student. Her employment is approved unanimously because she scored excellent results in the test and has a positive attitude. She has the courage to say what she thinks without feeling afraid of company executives. Although she believes there is nothing wrong with identifying her own things it is only when she is talking to Haruno Yu that she gets thrown off. She seems to have applied for an internship with some hidden motivations … …

Nakamura Yuri as Imayoshi Reiko
The Chief Financial Officer of Three Star Books and Hyoga Mamoru’s close friend. She has supported Mamoru publicly and privately since the time the company was established. As she takes a step back when she looks at things, she often plays the role of mediator when there is a clash of opinions between employees. She is responsible for raising and managing the company’s finances but she has doubts about Ichinose Ryo’s way of doing things. She ultimately respects Mamoru’s decisions. However, she has mixed feelings regarding Ichinose who is able to sway Mamoru’s resolve.

Furuta Arata as Ikari Kenji
The Chief Editor of Three Star Books. He is busy with deadlines every day in order to display good quality book content. His desk is full of documents and books and this clutter stands out even in the packed editorial department. Sometimes he gets so absorbed in his work that he loses sight of his surroundings. But he has an easygoing personality and does his work matter-of-factly without losing his cool. Despite the emotional Hyoga Mamoru’s non-committal exchanges on unreasonable demands, he will never forget his gratitude to her for giving him the best working environment. Mamoru also considers him an important person to whom she can say what she really feels.

Matsushima Nanako as Shimatani Satomi
The CEO of the major IT company MEDIA. Hyoga Mamoru’s former boss. She is the person who cultivated Mamoru who joined MEDIA fresh out of university, and has a high regard of her abilities. Even when Mamoru resigned from the company to set up Three Star Books, she wholeheartedly supported and encouraged her. She is the best boss to Mamoru and also someone she admires. As someone in a similar position, she becomes the only person with whom Mamoru can share the pressure and loneliness known to the top management of companies.

This blog contains information and musings on current and upcoming Japanese dramas but is not intended to be comprehensive.
View all posts by jadefrost →
This entry was posted in Fall 2021 Dramas, Fuji TV and tagged Eguchi Noriko, Furuta Arata, Matsushima Nanako, Shida Mirai, Super Rich. Bookmark the permalink.