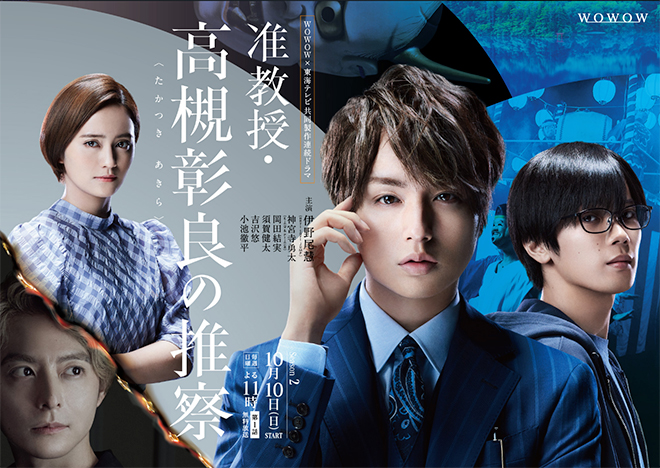 Synopsis
It has been one year since Associate Professor Takatsuki Akira and his student Fukamachi Naoya, who can see through people’s lies, began pursuing cases of mysterious phenomenon. One day, Terauchi Hajime, a freelance photographer with dyed blonde hair, visits Takatsuki’s office. He asks Takatsuki to look into the Okutama miracle girl known as Mana-sama who survived a plunging bus. He wants to know whether his mother has been deceived by Mana-sama whom she blindly believes. Takatsuki feels something is odd about Terauchi’s words and actions and starts investigating the matter with Ubukata Ruiko and Naoya. When the trio head to the accident site, they meet an eyewitness. This leads them to the house of Kariya Mana and her mother Makiko. But in the process of carrying out this investigation, Takatsuki’s past comes up and then Terauchi’s true motive is revealed.

Characters
Inoo Kei as Takatsuki Akira
An associate professor at Seiwa University’s Department of Literature. He specialises in folklore studies such as school ghost stories, urban legends and local folk tales. He runs a website called Tonari no Hanashi which solicits information on mysterious phenomenon and urban legends, and sets out to solve these strange incidents. When he comes in contact with such phenomenon, reason flies out the window and he is not able to respond to it with the common sense of adults. He has photographic memory and is extremely terrible with directions.

Jinguji Yuta as Fukamachi Naoya
A student at Seiwa University’s Department of Literature. He met Takatsuki Akira through a university lecture and ends up helping to solve mysterious phenomenon. He has been able to discern people’s lies ever since he had a strange experience at the age of 10. However, he has been solitary as a result of this. He always wears earphones to cut off people’s voices and he does not involve himself in other people’s matters. But he begins to face up to his solitude as he works alongside with Takatsuki.

Okada Miu as Ubukata Ruiko
A graduate student who belongs to Takatsuki Akira’s office. Her life revolves around research and she usually sports a dishevelled look. It is only when she teaches part-time at a cram school that she looks neater. She respects Takatsuki who is smart and also kind at heart. She has a bright personality and easily gets on well with people. As she is good at field work, she assists Takatsuki in his investigations.

Yoshizawa Hisashi as Sasakura Kenji
A detective with the Tokyo Metropolitan Police Department’s First Investigation Division. Takatsuki Akira’s childhood friend. He has a fierce and old-looking face. Despite his awkward personality, he is compassionate and helps out Takatsuki and Fukamachi Naoya. He is concerned about Takatsuki who is too absorbed in mysterious phenomenon. But at the same time, he respects and watches out for him. In fact, he is a coward and amusingly out of his element when faced with apparitions such as ghosts.

This blog contains information and musings on current and upcoming Japanese dramas but is not intended to be comprehensive.
View all posts by jadefrost →
This entry was posted in Fall 2021 Dramas, WOWOW and tagged Junkyoju Takatsuki Akira no Suisatsu Series, Koike Teppei. Bookmark the permalink.