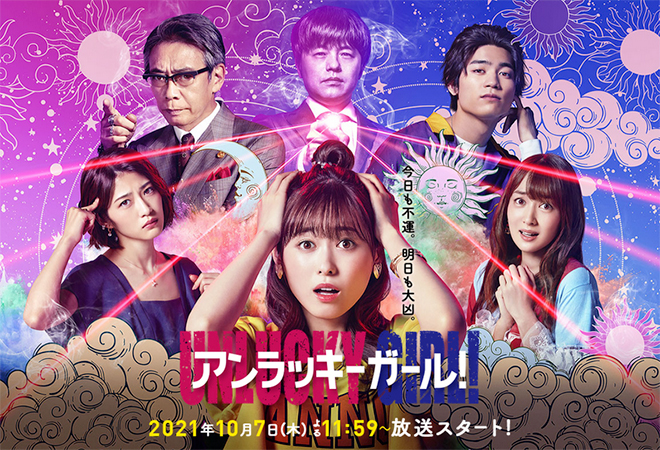 Synopsis
Fukura Sachi works for a lottery stand and has no luck in anything including money. There are two other women who are as unfortunate as she is. Ayanami Itsuki has no luck with work and is unemployed. She consults a man who promised to introduce her to a job but this ends in disappointment. Asakura Kaori has no luck with men or people, and is bothered that her boyfriend Sakurada Takumi is so irresponsible. When he starts to talk about robbing a bank because he is in need of money, she broaches a break up. Annoyed with Takumi after overhearing the conversation, Itsuki butts in. Sachi watches as they get into an argument. These three women become acquainted due to a small fire at the lottery stand. A lawyer Ibusuki Keitoku, who does fortune telling for a hobby, notices that they are exceptionally unlucky and sure enough, it is terrible when he reads their fortune. He advises that despite this bad luck, there may be a way out if they collaborate. Although the three of them act on the divinations, they get entangled in greater misfortune. Amid this streak of bad luck, they get rare instances of little happiness.

Characters
Fukuhara Haruka as Fukura Sachi
She has no luck in anything including money. She works for a lottery stand. Despite her cheerful nature, she has somehow or other half given up on life possibly because she is used to being unlucky.

Wakatsuki Yumi as Asakura Kaori
She has no luck with men or people. She is a freelance hair and makeup artist. She has a tendency to fall for hopeless men. She is indecisive and gets lonely easily. She is currently living together with Sakurada Takumi.

Takanashi Rin as Ayanami Itsuki
She has no luck with work. Even though she resigned from her previous company and sought to find another job, she is has had difficulty getting one and is currently unemployed. She has great strength of character and pride but is actually a coward. She insists that she does not believe in fortune telling.

Itagaki Mizuki as Sakurada Takumi
Asakura Kaori’s boyfriend. He is a former member of a music band but they disbanded and he is currently unemployed. He has a tendency to cause trouble.

Namase Katsuhisa as Ibusuki Keitoku
A mysterious man who is a lawyer by occupation but does fortune telling as a hobby. He meets Fukura Sachi, Asakura Kaori and Ayanami Itsuki, and shows an interest in their immeasurable bad luck. He has a hidden past and an unexpected motive … …

This blog contains information and musings on current and upcoming Japanese dramas but is not intended to be comprehensive.
View all posts by jadefrost →
This entry was posted in Fall 2021 Dramas, NTV and tagged Bakarhythm, Unlucky Girl. Bookmark the permalink.