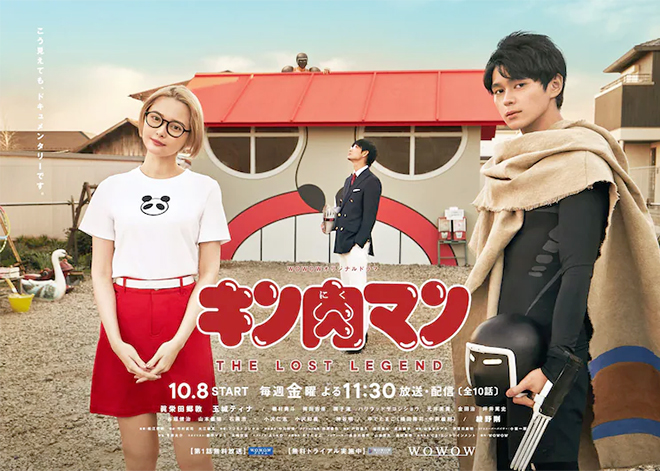 Synopsis
It is November 2019 and Muscleman, the live-action movie adaptation and production of the manga series about national hero Kinniku Man, is underway with Sono Shion as the director and Ayano Go as the producer and character Robin Mask. Before this, it had been said that the manga series was impossible to make into a movie. Furthermore, it becomes an ambitious plan to develop a trilogy consisting of 7-nin Akuma Chojin-hen, Kogane no Mask-hen and Kinniku Oui Soudatsu-hen. However, the day before the long-awaited press conference on the production of the movie, the production team faces sudden problems. They manage to get through the event without a hitch and Ayano immediately contacts the actor Maeda Gordon, who is training at the gym. He wants him to star in the movie as Warsman. Maeda is genuinely happy to receive this offer from Ayano whom he admires and the two of them head to a certain location. But there is a hidden “past” to this movie adaptation. With the help of his splendid co-stars, Maeda begins to investigate the mysterious phenomenon related to the adaptation of Kinniku Man. Will Maeda be able to get to the truth of the hidden “mystery” and will it be possible to adapt the movie that no one has been able to do before?

This blog contains information and musings on current and upcoming Japanese dramas but is not intended to be comprehensive.
View all posts by jadefrost →
This entry was posted in Fall 2021 Dramas, WOWOW and tagged Ayano Go, Kinniku Man. Bookmark the permalink.