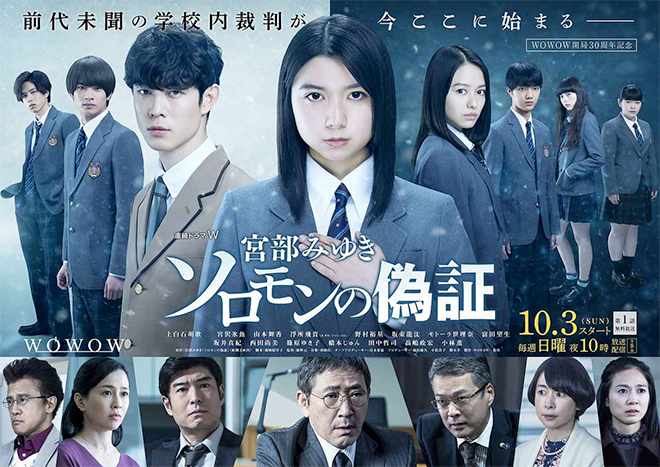 Synopsis
On the morning of Christmas, Fujino Ryoko finds her classmate Kashiwagi Takuya dead in the snow-covered grounds of their high school. While the police and the school conclude that he had committed suicide, Ryoko receives an anonymous letter accusing a classmate Oide Shunji and others of being the murderer. Was Takuya’s death a suicide or a murder? Speculation regarding his death from a fall mounts in the mass media as well as social media. Even though the school’s principal Tsuzaki Masao tries to return things to normal, another accident happens. They are a series of inexplicable events. Disagreeing with the responses of the adults, Ryoko and Kanbara Kazuhiko, a mysterious student from another school, rise up and decide that they will have their own trial. This is the beginning of an unprecedented trial in school.

Characters
Kamishiraishi Moka as Fujino Ryoko
A second year straight-A student at Jouho High School. Her father is a detective with the Tokyo Metropolitan Police Department and her mother is a lawyer. She has doubts about the death of her classmate Kashiwagi Takuya. Despite being swayed by all sorts of motives, she spearheads an unprecedented trial in school.

Kobayashi Kaoru as Tsuzaki Masao
The principal of Jouho High School. He receives the anonymous letter and struggles to deal with the students, police and mass media. Although he tries to return things to normal, he gets put in a difficult position.

Miyazawa Hio as Kanbara Kazuhiko
A mysterious second year student of a high school affiliated with Tohto University. A friend of Kashiwagi Takuya who fell to his death. While he is a student of another school, he becomes actively involved the school trial that Fujino Ryoko puts forward.

Takashima Masahiro as Fujino Tsuyoshi
Fujino Ryoko’s father. A detective with the Tokyo Metropolitan Police Department’s Second Investigation Division. He is investigating a case that is separate from Kashiwagi Takuya’s death. He offers advice to his daughter when she gets an anonymous letter and visits the school’s principal Tsuzaki Masao.

Tanaka Tetsushi as Oide Masaru
Oide Shunji’s father. He owns a company and also serves as a director on Jouho High School’s board. He uses his power to cover up his son’s problematic behaviour.

Yamamoto Maika as Miyake Juri
A second year student at Jouho High School. She is being bullied for having severe acne and is does not know what to do. While the possible causes of Kashiwagi Takuya’s death gets played up, she and her good friend Asai Matsuko take certain action.

Ukisho Hidaka as Noda Kenichi
A second year student at Jouho High School. Fujino Ryoko’s childhood friend and confidant. He takes action with Ryoko who in search of the truth behind their classmates death. He is suspicious of Kanbara Kazuhiko who suddenly appeared out of nowhere.

Nomura Yuki as Kashiwagi Takuya
A second year student at Jouho High School who mysteriously fell to his death on the night before Christmas. He had not come to school ever since he caused a commotion with Oide Shunji and his group in the canteen.

Bando Ryota as Oide Shunji
A second year student at Jouho High School. The leader of a group of delinquents who cause problems both inside and outside school. It is rumoured that Kashiwagi Takuya’s murder was due to his routine bad behaviour.

This blog contains information and musings on current and upcoming Japanese dramas but is not intended to be comprehensive.
View all posts by jadefrost →
This entry was posted in Fall 2021 Dramas, WOWOW and tagged Kamishiraishi Moka, Kobayashi Kaoru, Miyabe Miyuki, Shinozaki Eriko, Solomon no Gishou. Bookmark the permalink.