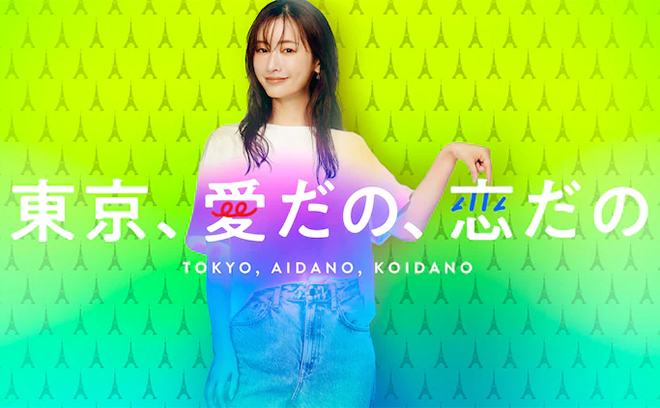 Story
A native of Shiga Prefecture, Wada Kae is 35 this year and works for a company in Tokyo that rents properties. While she thinks it is about time to get married to her boyfriend of 10 years, Hashimoto Tatsuya, she feels a sense of security with a male friend Ashiya Yusaku from university days. There are women around Kae attempting to find a place to live for some reason or other, and also acquaintances with worries. A bride-to-be who loses confidence in marriage; a career woman for a cosmetics company who is lonely beneath her glamorous role, a lawyer reexamining life plans, friends who lead starkly different lives as a full-time housewife and a photographer; a web designer who avoids complicated interpersonal relationships and is therefore insecure about the future. What is Tokyo to these women who try hard to live positively? And what will become of Kae’s romance?

Episode 1: Itameru Toki mo, Sukoyaka Naru Toki mo
Synopsis: Wada Kae (Matsumoto Marika) has a boyfriend Hashimoto Tatsuya (Kaji Yuki) whom she has been dating for 10 years, but she also has a male friend Ashiya Yusaku (Maiguma Katsuya) from university days who gives her a sense of security when they are together. One day, Hayashi Yukako (Ohara Sakurako) and Shuto Haruaki (Furukawa Yuki), a couple whose wedding is near at hand, come to the real estate company where Kae works, and have differences in opinion at the private viewing. They are invited to a surprise party of a married couple (Okura Koji, Itaya Yuka) whom they are acquainted with. However, they learn astonishing facts while they are there.
Cast: Matsumoto Marika, Kaji Yuki, Maiguma Katsuya, Ohara Sakurako (guest star), Furukawa Yuki (guest star), Eguchi Noriko (guest star), Okura Koji (guest star), Itaya Yuka (guest star)
Preview: Itameru Toki mo, Sukoyaka Naru Toki mo Teaser

Episode 2: Unmei no Hito
Synopsis: 29-year-old freelance writer Okuno Haruka (Goriki Ayame) wishes to get married by the age of 30. She visits Kae’s (Matsumoto Marika) real estate company in order to do a story on choosing a dream home. Kae tells her that feelings and timing are important when selecting a property and Haruka realises that this is somehow similar to searching for a marriage partner. Although she hopes for a spontaneous encounter, she meets Oda Naoki (Miura Takahiro) who has common interests through a matchmaking app and feels that this is destiny. She immediately starts living with him but soon finds out a shocking truth. Around this time, she is reunited with a former classmate Akamine Hideaki (Tanaka Shunsuke) by chance … …
Cast: Matsumoto Marika, Kaji Yuki, Maiguma Katsuya, Goriki Ayame (guest star), Miura Takahiro (guest star), Tanaka Shunsuke (guest star)
Preview: Unmei no Hito Teaser

Episode 3: Koi wa Itsudemo
Synopsis: Kae’s (Matsumoto Marika) gym buddy, Motomiya Fuyuko (Megumi), is 39 and works for a cosmetics company. A career woman who is respected by the people around her, she always behaves calmly so gender is not brought up. But because she is no different from a middle-aged man at heart, the wonderful boyfriend she thought she had, rejects her. Men leave Fuyuko one after another and by the time she realises it, she is single. Meanwhile, Saeki Riku (Koseki Yuta), a young man 15 years Fuyuko’s junior, is transferred to her department. His dream is to create high-end cosmetic products for men. Saeki is frank, hardworking and in addition friendly to Fuyuko. While mentoring him, Fuyuko begins to develop feelings that are different from usual.
Cast: Matsumoto Marika, Kaji Yuki, Maiguma Katsuya, Megumi (guest star), Koseki Yuta (guest star), Tanaka Yoji (guest star)
Preview: Koi wa Itsudemo Teaser

Episode 4: Minpou 709-jo
Synopsis: 32-year-old lawyer Masaki Yuko (Shuri) comes to the real estate company wishing to buy a property in the Minato ward, which is near her workplace. Kae’s (Matsumoto Marika) junior Matsushima Hajime (Ichinose Hayate) advises that she make a compromise regarding her desired area and size but she seems dissatisfied. A client called Tada Misaki (Ando Sei), who is troubled about her husband’s affair, consults Yuko. She intends to stay married and wants a hefty compensation from the other woman. While facing difficulty gathering evidence of his infidelity for this purpose, she ends up meeting both Misaki and the adulterer Chie (Ando Tamae) in person to negotiate a settlement. As Yuko listens to both sides of the story – the jealousy and need for approval, she begins to reexamine her own plans for her future … …
Cast: Matsumoto Marika, Kaji Yuki, Maiguma Katsuya, Shuri (guest star), Ando Sei (guest star), Oshinari Shugo (guest star), Ando Tamae (guest star)
Preview: Minpou 709-jo Teaser

Episode 5: The Grass is always Greener on the Other Side
Synopsis: 39-year-old Yokoyama Ryoko (Usuda Asami), a senior in the photography club that Kae (Matsumoto Marika) belonged to back in university, is a full-time housewife, and leads an uneventful but happy life with her husband Kosuke (Onoe Hiroyuki) and their 10-year-old son. She has been posting photographs of the colourful lunch boxes that she makes on social media. Hashiba Natsuki (Ichikawa Yui) is also 39 and was a member of the photography club during the same period. She is currently a photographer and projects a fulfilling job through the photographs taken on location and uploaded on social media. Ryoko and Natsuki meet again after a long while at a photography club reunion. The two of them who had checked out each other’s social media feed while taking different paths in life … …
Cast: Matsumoto Marika, Kaji Yuki, Maiguma Katsuya, Usuda Asami (guest star), Ichikawa Yui (guest star), Onoe Hiroyuki (guest star)
Preview: The Grass is always Greener on the Other Side Teaser

Episode 6: Tokyo Alone
Synopsis: 30-year-old Omori Sumire (First Summer Uika), a web designer who takes on assignments with Kae’s (Matsumoto Marika) company, enjoys single life in Tokyo. She is bad at dealing with troublesome people and always curt in work-related interactions. As a result, Kae is frequently thrown off. One day, Sumire gets injured in an unexpected accident and has no choice but to be admitted to a hospital. Seeing the other patients in the same ward receive visitors, Sumire begins to feel the inconvenience and loneliness of her forlorn hospital life. Even when her discharge date is fixed, she struggles to pack up on her own and is in difficulty when a worried Kae rushes to the hospital after being unable to get hold of her … …
Cast: Matsumoto Marika, Kaji Yuki, Maiguma Katsuya, First Summer Uika (guest star), Hasegawa Tomoharu (guest star)
Preview: Tokyo Alone Teaser

Episode 7: Tokyo no Hito
Synopsis: Yusaku (Maiguma Katsuya) tells Kae (Matsumoto Marika) that he is leaving Tokyo and moving to Hokkaido. After that, the two of them are about to cross the line in loneliness and feelings they cannot hold back. On the day he departs for Hokkaido, Kae thinks back to her memories with him. Since the time she first met Yusaku at the photography club’s welcome party for new members, they began to develop a relationship that is more than friends. She feels comfortable in her relationship with him but if they go steady, would that be the end of their relationship? Kae reexamines her life and also the city of Tokyo. What sort of conclusion will she come to?
Cast: Matsumoto Marika, Kaji Yuki, Maiguma Katsuya
Preview: Tokyo no Hito Teaser

This blog contains information and musings on current and upcoming Japanese dramas but is not intended to be comprehensive.
View all posts by jadefrost →
This entry was posted in Paravi, Summer 2021 Dramas and tagged Tokyo Ai da no Koi da no. Bookmark the permalink.