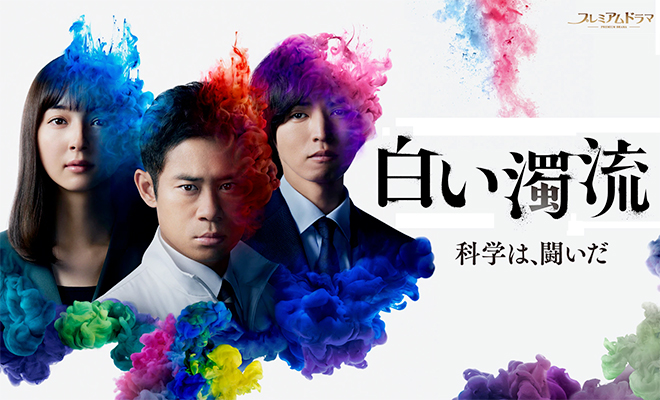 Story
All sorts of incidents such as falsified or plagiarised theses and misappropriation of research funds is happening at Japanese universities and research institutions right now. Academics are evaluated based on the number of theses and research funds they secure while young researchers are used as cheap labour despite their precarious standing. It is has been highlighted that this environment which is not conducive to research can give rise to moral hazard. Yoshinami Kazuki is a fixed-term researcher at a university’s department of pharmacy. Although he holds a part-time job concurrently, he talks to his colleague Kashiwagi Wataru and childhood friend Kawahara Tomoko about his dream of discovering a substance that will be useful to people some day. Wataru is also a fellow researcher at the same university. They are rivals vying for the few positions in the university, but talk to each other about their dreams. One day, Kitano Ryuji, the CEO of a mid-sized pharmaceutical company whom Professor Yamamoto Hideaki knows, approaches them about a high incidence of consumers breaking out in hives after eating cookies that use a flavouring that the company sells wholesale. This request will soon change Kazuki’s destiny. He makes a groundbreaking discovery. This results in Kazuki and Wataru getting entangled in a fight between companies over patents. Eventually they are pushed into a situation where they are forced to commit fraud. When this is brought to the knowledge of Tomoko, who is a newspaper reporter, the relationship between the three of them … … ?!

Characters
Ito Atsushi as Yoshinami Kazuki
A researcher who is employed for a fixed term in university’s department of pharmacy. He has been working part-time as a family tutor for living but his path greatly changes through his discovery of a certain substance.

Sasaki Nozomi as Kawahara Tomoko
Yoshinami Kazuki’s childhood friend who admires him like an older brother. She works for a local newspaper and eventually goes after Kitanodo Pharmaceutical for its improprieties.

Kiriyama Ren as Kashiwagi Wataru
Yoshinami Kazuki’s close friend and a postdoctoral researcher. Favoured by Yamamoto Hideaki, the supervising professor, he has been involved in joint research with large pharmaceutical company. However, the roles are reversed after Kazuki’s discovery.

Fujino Ryoko as Kitano Yoko
A student whom Yoshinami Kazuki is tutoring for the university entrance exam. She repeated a year in high school due to treatment she needed for her heart condition. Her father is the CEO of Kitanodo Pharmaceutical.

Yajima Kenichi as Yamamoto Hideaki
The supervising professor of the lab that Yoshinami Kazuki belongs to. There are endless dark rumours that he uses his political clout to get a lot of donations from pharmaceutical companies.

Nishimura Masahiko as Kitano Ryuji
The second-generation CEO of Kitanodo Pharmaceutical, a mid-sized pharmaceutical company. He has an inferiority complex due to his background in sales instead of research like the company’s founder. Wanting to make his own mark, he quickly zeroes in on Yoshinami Kazuki’s discovery.

This blog contains information and musings on current and upcoming Japanese dramas but is not intended to be comprehensive.
View all posts by jadefrost →
This entry was posted in NHK, Summer 2021 Dramas and tagged Shiroi Dakuryu. Bookmark the permalink.