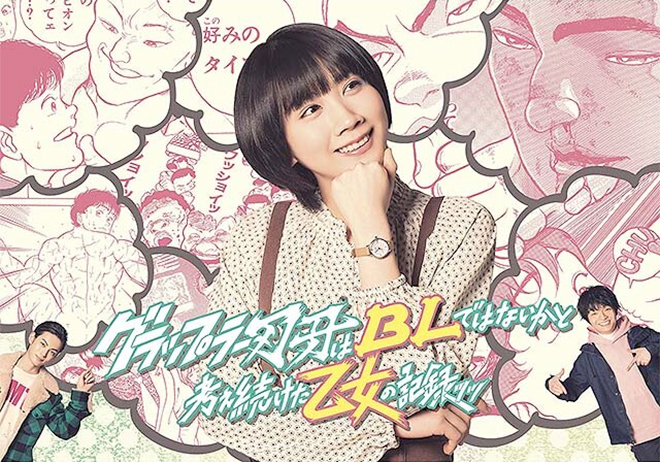 Story
Kojima Akane works for a stationary manufacturer. She has a hobby reading BL manga and no one in the company knows about. Akane is such a rabid fan of BL manga to the extent that she replaces even the most common things around her with BL. One day, she comes to know about Grappler Baki, a manga series on hand-to-hand combat, and discovers tremendous potential for BL in the physical beauty of the fighters and their captivating behaviour. She starts obsessing not about who is the strongest or which technique is amazing but the pairing of the protagonist Hanma Baki and other characters from Grappler Baki. At work, Akane hides her true self and does her job flawlessly. Her boss Kajiwara Noboru relies on her while her junior Takeno Kohei admires her. At night, she chats with fellow enthusiasts Ishida Miharu and Imazato Chiko, and talks extensively about Baki and BL in her imaginary world at home. She is happy every day. However, her boss Kajiwara and Takeno’s preparation for an important presentation as well as a reunion with an ex-classmate Shibamoto Taiju start to disrupt her halcyon days.

Characters
Matsumoto Honoka as Kojima Akane
A designer who works for a stationary manufacturer. She is so obsessed with BL manga that even the most common things around her ends up becoming BL.

Okayama Amane as Takeno Kohei
Kojima Akane’s junior at work. He likes Akane but despite proactively making his move, he is completely snubbed, not to mention considered bothersome. He feels uneasy about the overly familiar way that Shibamoto Taiju treats her.

Kamio Fuju as Shibamoto Taiju
Kojima Akane’s former high school classmate. An employee of a vendor, he goes in and out of Akane’s company. Their unexpected reunion throws her life into disarray. Even though he is cheerful and friendly, he is outspoken about everything and cannot read situations. He is the natural nemesis that she cannot forget even though she wants to?!

Iwasaki Udai as Kajiwara Noboru
Kojima Akane’s kind boss. He is concerned about Akane and Takeno Kohei who are preparing for an important presentation. But he is a rather quirky person.

Ending Theme
Wish Upon a Star by CHAI

This blog contains information and musings on current and upcoming Japanese dramas but is not intended to be comprehensive.
View all posts by jadefrost →
This entry was posted in Summer 2021 Dramas, WOWOW and tagged Grappler Baki wa BL dewa nai ka to Kangaetsuzuketa Otome no Kiroku. Bookmark the permalink.