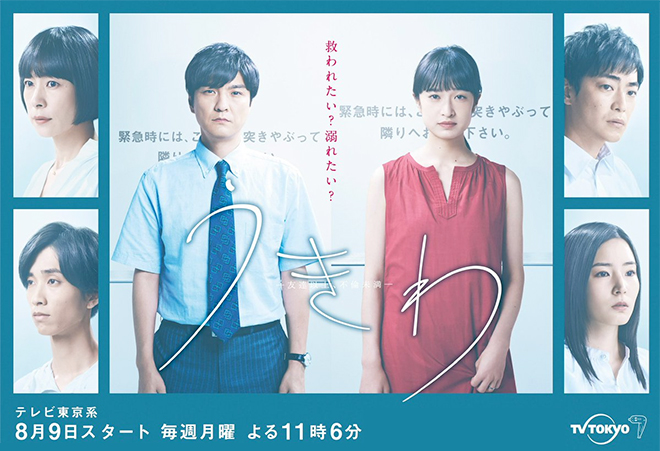 Synopsis
Nakayama Maiko quit work and has just moved to Tokyo from Hiroshima due to her husband Takuya’s job. She is warmly welcomed by her husband’s boss Futaba Hajime and his wife Sei, who live in the apartment next door. Although Maiko is excited about her new life in Tokyo, Takuya has been busy with work. He comes home late and does not eat the dinner she prepares for him every night. Maiko becomes friends with Futaba through conversations across the verandah. As he is kind and a good listener, she gradually opens up to him. However, Futaba has certain regrets and secrets of his own. Then Maiko learns about her husband’s lies for the first time and what she had believed in thus far starts to crumble. Futaba’s secret is also that his wife is having an affair. The more Maiko and Futaba bond, the more they are drawn to each other. Reasoning that extending a hand to help when someone has been betrayed by a trusted person and cannot get back up is salvation, they tell themselves this is not an affair. Will the two of them end up crossing the line?

Characters
Kadowaki Mugi as Nakayama Maiko
An ordinary housewife who has moved to Tokyo because of her husband Takuya’s job and is excited about her new life in Tokyo. But Takuya comes home late every night and she discovers his affair. She is gradually drawn to Futaba Hajime who lives next door and has become her conversation partner.

Moriyama Naotaro as Futaba Hajime
Nakayama Takuya’s boss who lives in the apartment next to the Nakayamas at the housing provided by the company. He is kind and a good listener, and provides Maiko with companionship. But like Maiko, his wife Sei is cheating on him.

Nishida Naomi as Futaba Sei
Futaba Hajime’s wife. She is also having an affair.

This blog contains information and musings on current and upcoming Japanese dramas but is not intended to be comprehensive.
View all posts by jadefrost →
This entry was posted in Fall 2021 Dramas, TV Tokyo and tagged Kadowaki Mugi, Ukiwa. Bookmark the permalink.