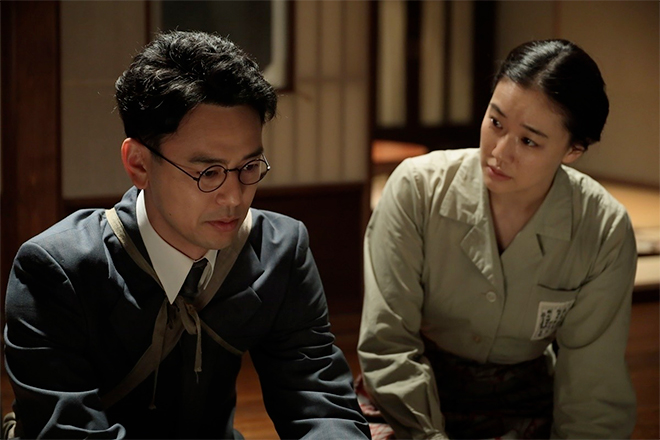 Date: From 10.00 p.m., 13 August 2021
Original Work: Kyushu Daigakusei Taikaibo Jiken 70-nenme no Shinjitsu by Kumano Iso
Scriptwriter: Furukawa Takeshi
Director: Tanaka Tadashi
Cast: Tsumabuki Satoshi, Aoi Yu, Nagayama Kento, Tsurumi Shingo, Yamanishi Atsushi, Tsuji Kazunaga, Nakahara Takeo, Wakamura Mayumi
Synopsis: Torii Taichi (Tsumabuki Satoshi) is an associate professor at Seibu Teikoku University’s faculty of medicine. It is May 1945 in the last stage of the Pacific War and he helps out in surgeries on American prisoners of war at the behest of an ambitious and dictatorial professor Ishida Kozo (Tsurumi Shingo) who is an outstanding surgeon. However, these surgeries are not meant for treatment but for experiments. Taichi advises the professor against it but gets shot down. Eight prisoners of war die after four surgeries. The horrific sins committed by doctors who are supposed to save lives and the truth At the end of the war, these experiments come to light and Taichi is arrested by the occupation forces and is put on trial. He receives the death sentence as a war criminal and has to come to terms with not having put a stop to these atrocious deeds. Objecting against the ruling which has cast Taichi as the mastermind of this case, his wife Fusako (Aoi Yu) seeks a fair trial. She uncovers the distorted facts and makes every effort to save him. Fusako’s desperation and the encounters with all sorts of prisoners on death row, leads Taichi to realise the true sins that he had turned away from … …
Website: www.nhk.jp/p/ts/77NKRR6Y1J
Twitter: twitter.com/nhk_dramas

This blog contains information and musings on current and upcoming Japanese dramas but is not intended to be comprehensive.
View all posts by jadefrost →
This entry was posted in NHK, Summer 2021 Drama Specials and tagged Aoi Yu, Nagayama Kento, Shikatanakatta to Iu te wa Ikan no desu, Tsumabuki Satoshi, Wakamura Mayumi. Bookmark the permalink.