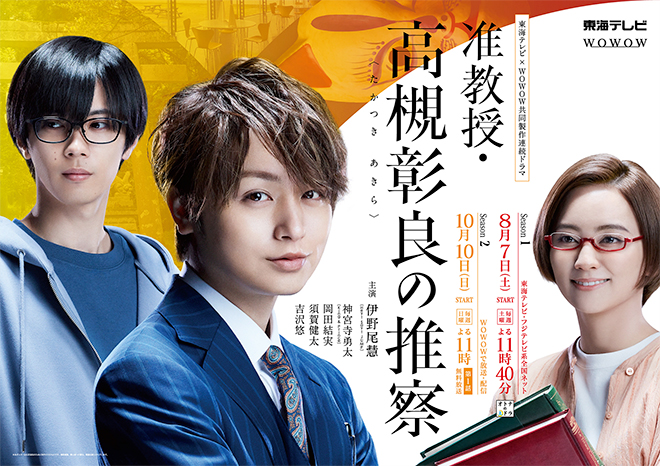 Story
Eight years ago, a young Fukamachi Naoya missed the village festival that he had been looking forward to as a result of a fever. But when he woke up in the middle of the night, he could still hear the sounds of the festival from outside. Putting on a mask so that he would not get yelled at if discovered, he slipped out of the house. Everyone wore masks and danced in silence. But it was a festival that no human should enter. From that day on, Naoya has been able to detect lies by discerning the distortion of a person’s voice when a lie is told. Now a university student, he lives a solitary life. His parents kept away from him after noticing his ability and he has also avoided forming any connections with other people. But when Naoya attends a lecture about folklore studies, he takes an interest in Associate Professor Takatsuki Akira whose words contain no lies. His voice is comfortable to Naoya’s ears. Takatsuki has the ability to instantly memorise everything he sees and is only interested in mysterious phenomenon in the world. Naoya is drawn to him for some reason. One day, a strange incident involving Kokkuri-san occurs at a neighbourhood elementary school where Hirahara Marika and Manabe Kazuo work. Naoya is surprised by the words of a child that he meets by chance as there is no distortion in the voice. Together with graduate student Ubukata Ruiko, he somehow ends up pursuing this mystery with Takatsuki as his assistant.

Characters
Inoo Kei as Takatsuki Akira
An associate professor at Seiwa University’s Department of Literature. He specialises in folklore studies such as school ghost stories, urban legends and local folk tales. He runs a website called Tonari no Hanashi which solicits information on mysterious phenomenon and urban legends, and sets out to solve these strange incidents. When he comes in contact with such phenomenon, reason flies out the window and he is not able to respond to it with the common sense of adults. He has photographic memory and is extremely terrible with directions.

Jinguji Yuta as Fukamachi Naoya
A student at Seiwa University’s Department of Literature. He meets Takatsuki Akira through a university lecture and ends up helping to solve mysterious phenomenon. He has been able to discern people’s lies ever since he had a strange experience at the age of 10. However, he has been solitary as a result of this. He always wears earphones to cut off people’s voices and he does not involve himself in other people’s matters. But he begins to face up to his solitude as he works alongside with Takatsuki.

Okada Miu as Ubukata Ruiko
A graduate student who belongs to Takatsuki Akira’s office. Her life revolves around research and she usually sports a dishevelled look. It is only when she teaches part-time at a cram school that she looks neater. She respects Takatsuki who is smart and also kind at heart. She has a bright personality and easily gets on well with people. As she is good at field work, she assists Takatsuki in his investigations.

Yoshizawa Hisashi as Sasakura Kenji
A detective with the Tokyo Metropolitan Police Department’s First Investigation Division. Takatsuki Akira’s childhood friend. He has a fierce and old-looking face. Despite his awkward personality, he is compassionate and helps out Takatsuki and Fukamachi Naoya. He is concerned about Takatsuki who is too absorbed in mysterious phenomenon. But at the same time, he respects and watches out for him. In fact, he is a coward and amusingly out of his element when faced with apparitions such as ghosts.

This blog contains information and musings on current and upcoming Japanese dramas but is not intended to be comprehensive.
View all posts by jadefrost →
This entry was posted in Fuji TV, Summer 2021 Dramas and tagged Junkyoju Takatsuki Akira no Suisatsu Series, Shida Mirai. Bookmark the permalink.