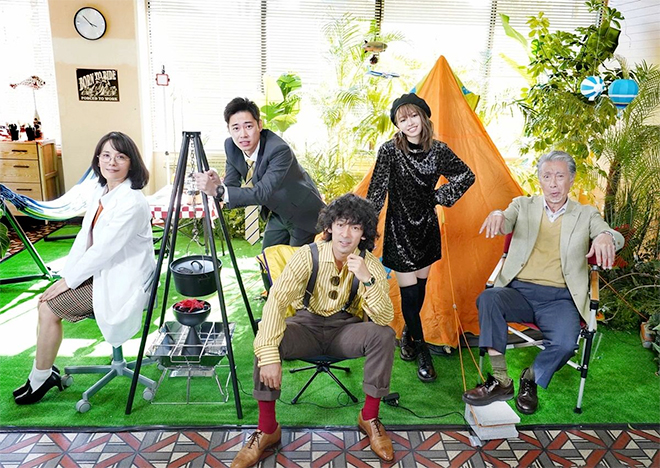 Date: From 8.00 p.m., 5 August 2021
Scriptwriter: Okita Haruka (Night Doctor, Radiation House Season 1, Good Doctor)
Director: Kinoshita Naomi
Cast: Takito Kenichi, Yamamoto Maika, Tozuka Junki, Tomita Yasuko, Takada Junji
Synopsis: Kusakabe Eiji (Tozuka Junki) from the Criminal Affairs Division receives a discharge notice due to an injury sustained in a case and is transferred to Musashino Chuo Police Precinct’s Second General Affairs Unit under the Community Safety Division. Called Hikikomorigakari by people, this unit was created to support various police departments burdened with a perennial manpower shortage amid the reform of work practices. Its members are Hanafusa Hitoshi (Takada Junji), a former veteran detective who has retired for three years but created this ragtag team at the request of the commissioner; Momota Sakura (Yamamoto Maika), a one-time hacker who typically holes up at a manga cafe; Iefuji Tokiko (Tomita Yasuko), a former member of the crime lab who has been cooped up at home looking after her mother. Their leader is Hikitani Taro (Takito Kenichi), who settled in the precinct at some point and made a room his own. Imai Junna (Kita Kana) comes to Hikikomorigakari with a request for them to search for her missing fiance. At the same time, Yamagishi Ryohei, the head of a leading IT company, is strangled dead and his body is found kneeling with his forehead touching the floor. Hanafusa arranges for the team to join the investigation into the case that the Criminal Affairs Division’s Violent Crimes Unit has been pursuing. Hikitani and Kusakabe are stunned when they see Yamagishi’s photo among the investigation materials. Although the name is different, he is the fiance that Junna had been looking for. Yamagishi had used false names and perpetrated a number of marriage scams. Meanwhile, they find a man who came out hastily from the park where Yamagishi was killed from the black box of a car parked nearby on the day of the murder. Hikitani spots a vintage bracelet on the man’s left wrist and realises that it is the same one worn by Machida Kazuya (Suga Kenta), the man who delivers water to the nursery school where Junna works. Kusakabe heads to Machida’s workplace together with the Violent Crimes Unit. However, Machida has gone missing after saying that he was going to meet an old acquaintance who is an unscrupulous lawyer. Then the dead body of Asami Mari, the legal advisor for Yamagishi’s company, is discovered. Like Yamagishi, she was found in the same posture. Security camera footage shows that Mari had come in contact with Machida at a bar just before she died. Hikitani is bothered by the theory that Machida is the criminal and reviews the security camera footage once again. Tokiko finds and analyses the face reflected on the glass. It turns out that person is Fukutomi Yutaka (Masana Bokuzo), the head of a rival IT company. But Fukutomi denies killing Yamagishi and Mari, and even has an alibi at the time that Yamagishi was murdered. In addition, he starts to talk about a past relationship that made him think Machida resents Yamagishi. As suspicion grows that Machida is the criminal, a string of shocking facts are established and the investigation gets thrown into disarray.
Website: www.tv-asahi.co.jp/hikikomorigakari

This blog contains information and musings on current and upcoming Japanese dramas but is not intended to be comprehensive.
View all posts by jadefrost →
This entry was posted in Summer 2021 Drama Specials, TV Asahi and tagged Keishichou Hikikomorigakari, Takito Kenichi. Bookmark the permalink.