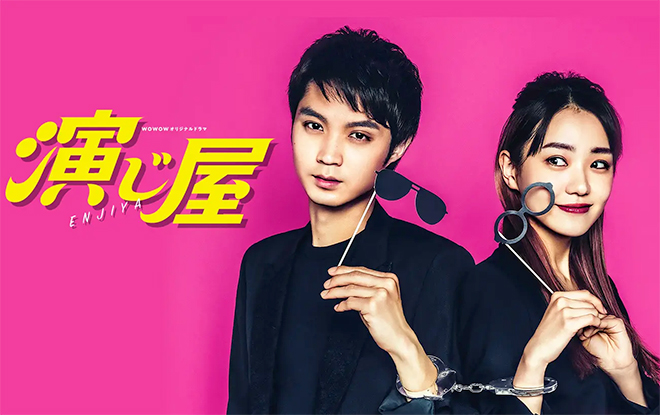 Story
On the day before his wedding ceremony, Tomoki ended up losing both his job and fiancee Mayuko after being falsely accused of molest. A year and a half later, he finds out by chance that Sano Miyu, the young woman who claimed he was a molester, and the eyewitness Ozawa Akira, were accomplices. Even after he conveys this to Mayuko, he gets rebuffed since she is preparing to marry another man. A desperate Tomoki decides to take his own life. He is about to jump from the rooftop of a building when he sees a woman screaming and running towards him. She has been attacked by a man wielding a knife. Even Tomoki who happened to be there ends up getting stabbed … … Or so he thought. But this is all staged – an act by the performer Aika and her client. Tomoki learns about the existence of this new occupation known as enjiya from Aika where she gets into a client’s requested character. He decides to hire her to take revenge on the people who falsely accused him of molest. Tomoki is initially unable to conceal his bewilderment with the occupation but he is gradually captivated by this world. He grows through “exacting revenge” with Aika and in the process, falls in love with her.

Characters
Nao as Matsuda Aika
She has made enjiya her profession and gets into the character requested. She has a strong sense of vengeance due to a past incident.

Isomura Hayato as Shibasaki Tomoki
He was falsely accused of molest the day before his wedding and lost everything. Just as he is about to commit suicide, he meets Matsuda Aika and gets involved with the enjiya.

Kasahara Shinji as Matsuda Eita
The leader of the enjiya. He acts as Matsuda Seiru’s father. Although he will do anything for money, he cares most about his enjiya family.

Aoyama Noriko as Matsuda Yuri
She usually plays Matsuda Seiru’s mother. She has a secret past before she joined the enjiya?

Kato Yuzuna as Matsuda Seiru
A 5-year-old girl who believes that her enjiya family is her real family.

Tokunaga Eri as Fukuda Mayuko
Shibasaki Tomoki’s ex-fiancee. She breaks off her wedding to Tomoki after he is mistaken for a molester.

Ito Momoka as Sano Miyu
The main culprit who framed Shibasaki Tomoki for molest. She is sly and treats adults with contempt.

Oshinari Shugo as Tomura Seiji
One of the participants at a gathering. His pleasant looks belie a dark nature and he plots to frame Shibasaki Tomoki.

Hakamada Yoshihiko as Aizawa Toshihiko
The CEO of an IT company who is a client of the enjiya and frequently makes requests. He has a dangerous side. If they did not exist, he could end up a criminal.

This blog contains information and musings on current and upcoming Japanese dramas but is not intended to be comprehensive.
View all posts by jadefrost →
This entry was posted in Summer 2021 Dramas, WOWOW and tagged Enjiya. Bookmark the permalink.