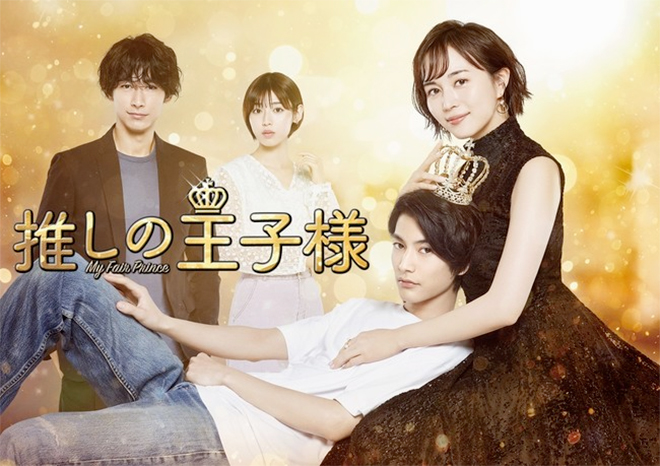 Story
36-year-old Hidaka Izumi is the CEO of Pegasus Inc, a startup which creates dating games for females. While working at an insurance company, she led a dreary life without any dreams or motivation. At that point, she was introduced to such games for females by a friend. She started playing them casually and her heart was instantly captured. Finding meaning in life for the first time, Izumi moved to work for a game company where she met a top creator Mitsui Tomohisa. Four years ago, she started Pegasus Inc together with him with the ambition of creating the best games from scratch. Its first game called Love My Pegasus became an unprecedented huge hit when it was released. The game so popular that it was said to have revolutionised the world of dating games for females and Izumi was hailed as an up-and-coming businesswoman. In this game, players fall in love with the character Kento-sama who was created based on her ideals. Although things seem to be going well for Izumi, she has been racking her brain for the production of the next game. She is busy raising development funds and even seeks an investment from Mizushima Juzo, the CEO of a major outdoor wear manufacturer. However, he refuses outright. One night, a weary Izumi is walking home after having one too many drinks when a man literally falls from the sky all of a sudden. She is stunned but gets a bigger surprise after taking a look at his face. This man is a dead-ringer for Kento-sama in Love My Pegasus. He is 23-year-old Igarashi Wataru who seems like a prince who had swooped down to earth when he had actually been running away from debt collectors. Only his looks match Izumi’s ideals. Wataru is rude, uncultured and lethargic. Despite her disappointment, Izumi decides to change his life and develop him into the ideal guy as a result of an unexpected turn of events.

Characters
Higa Manami as Hidaka Izumi
Pegasus Inc’s CEO. Before she became a CEO, she worked for a local insurance company, and back then, she was leading a dull life of tedium. She started Pegasus Inc with Mitsui Tomohisa. Their first release Love My Pegasus was a huge hit. Apart from her superb communication skills and management ability, she is trusted by her subordinates because she is open with everyone, never gives up no matter how difficult the situation and relentlessly presses forward. In her private life, she has not been in a relationship for years and is entirely engrossed in Love My Pegasus’s character Kento-sama. She always forgets about work and gets absorbed in Love My Pegasus once a week.

Watanabe Keisuke as Igarashi Wataru
A part-time worker who currently works in the day as a building cleaner. He is ill-mannered, uncultured and apathetic. He has also never liked someone before. He came to Tokyo from his hometown in his teens for a certain reason. However, nothing went well as he drifted from one job to another. He is in debt now and of course cannot afford to pay back. His hair is unkempt, he also does not care about the clothes that he wears and passes each day without any expectations for his future. However, he looks exactly like Kento-sama who was created based on Hidaka Izumi’s ideals. One day, he meets Izumi and his life changes completely.

Dean Fujioka as Mitsui Tomohisa
Pegasus Inc’s Deputy CEO and Game Director. Originally a top creator at a leading game company that Hidaka Izumi came to work at when she made a career switch, he noticed her talent and passion for games and the two of them started Pegasus Inc together. During his student days, he set his sights on the film industry. A true creator who has even produced his own film, he is always clever with his words and actions. He is the most particular about work and also takes exceptional care of his subordinates. He has a boyish side when amused by the things he is interested in. He is Izumi’s most trusted partner, and at the same time, he has special feelings for her that he keeps to himself.

Shiraishi Sei as Furukawa Anna
A university student who works at Pegasus Inc as an intern. Like Hidaka Izumi, she loves dating games for females and is a huge fan of Love My Pegasus. Her dream is to be an employee at the company as she admires Izumi. She is not only upfront and honest but also thoughtful and is liked by everyone. She is Igarashi Wataru’s childhood friend and secretly likes him.

Funakoshi Eiichiro as Mizushima Juzo
The President and CEO of Lantern Holdings, a major outdoor wear manufacturer. He decides to enter the entertainment field as he diversifies his business. That is why Hidaka Izumi is negotiating with him about his investment in Pegasus Inc’s next game. A fearless, shrewd man who will stop at nothing in order to achieve his objectives but he also has a compassionate side. Whether he makes an investment in the next game is entirely at his discretion. Izumi never expects that she would find herself standing on the edge because of him … …

This blog contains information and musings on current and upcoming Japanese dramas but is not intended to be comprehensive.
View all posts by jadefrost →
This entry was posted in Fuji TV, Summer 2021 Dramas and tagged Dean Fujioka, Oshi no Oujisama. Bookmark the permalink.