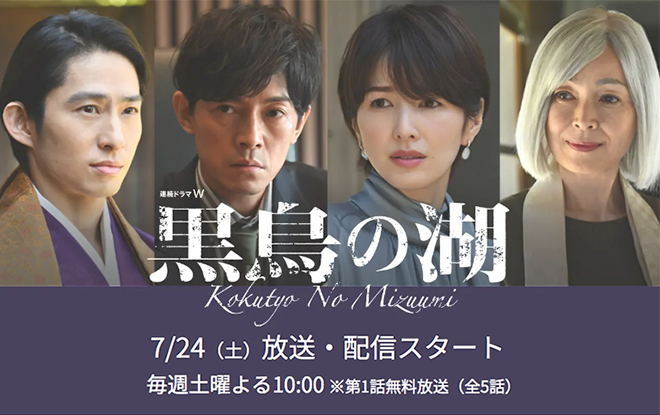 Story
A young woman is kidnapped and her belongings are sent individually to her family. Just about everything is too similar. Zaizen Shota, the CEO of Zaizen Corporation, recalls an uncannily similar case 18 years ago. He had been an investigator at a private detective agency and was asked by a man called Tanioka Soichiro to investigate a case. Tanioka’s daughter was abducted and a piece of her dress, cut up underwear, torn off nails and photos were sent to him. Zaizen is shaken by the similarities of this new case. He owes his glittering life right now with his beautiful wife Yuko to significant tampering he had done on that case 18 years ago. As a result, the criminal was never caught. Now Zaizen’s beloved daughter Mika goes missing and her belongings are sent to him. He is shaken by the very similar cases in the present which are also stoking public fears. On the other hand, Yuko is anxious and has a secret that she cannot tell anyone. Seeking salvation, she starts going to a temple. As Zaizen proceeds to investigate Mika’s disappearance on his own, he begins to learn about Yuko’s past. Is this payback time for his sins of the past? His life starts to go awry … …

Characters
Fujiki Naohito as Zaizen Shota
The CEO of Zaizen Corporation. He took advantage of a case he was asked to investigate 18 years ago to attain his status as CEO and his family. He feels guilty for his past mistake as he is made sport by it.

Kichise Michiko as Zaizen Yuko
Zaizen Shota’s wife. When her daughter disappears one day, she starts to go to a temple in search of salvation. She has a secret that she cannot tell anyone.

Miyake Ken as Jakuin
The organiser of the meditation sessions which Zaizen Yuko attends, and the son of the temple’s chief priest. Many people seeking salvation come to this divine young man with a kind smile.

Sugimoto Tetta as Yagi Yukinori
Zaizen Shota’s trusted boss during the time he worked at the private detective agency. He is now the principal of Yagi Business School.

Zaizen Naomi as Daikoku
Jakuin’s mother who holds the meditation sessions together with him. She has a big heart and empathises with people. She gives Zaizen Yuko emotional support.

Takuma Shin as Dejima Fumio
The strict younger brother of Zaizen Shota’s father. He hates Shota. A wealthy man who ran a clock shop and owned several properties. He was murdered by someone 18 years ago.

Nakajima Hiroko as Tanioka Hisako
Tanioka Soichiro’s daughter-in-law. She gets interested in her father-in-law’s unfathomable investigation request 18 years ago and helps Zaizen Shota who is conducting his own investigation.

Iida Kisuke as Detective Kishimoto
The detective in charge of the case 18 years ago. He has misgivings about Zaizen Shota and when a remarkably similar case occurs, he shows up in front of Shota again.

This blog contains information and musings on current and upcoming Japanese dramas but is not intended to be comprehensive.
View all posts by jadefrost →
This entry was posted in Summer 2021 Dramas, WOWOW and tagged Fujiki Naohito, Kokucho no Mizuumi. Bookmark the permalink.