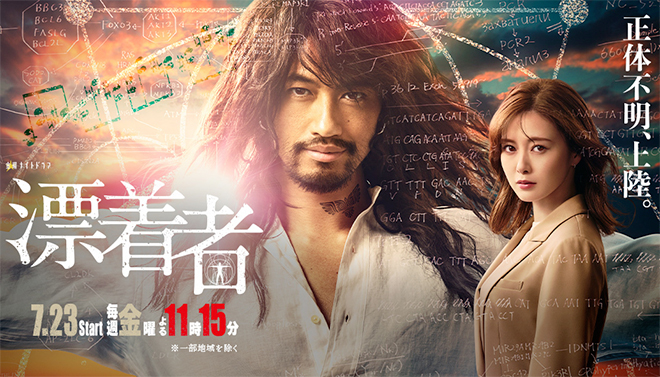 Story
A naked handsome man drifts ashore on the coast of a certain region. Three high school girls who happened to discover this man, post a video of him on social media. The hashtag #handsomenakeddrifter starts trending and he suddenly becomes the man of the moment. He is called Hemingway because he had muttered the words “Winner Take Nothing”, which is the name of one of Ernest Hemingway’s collection of short works, when he was found. At the hospital that he was rushed to for emergency treatment, Hemingway is diagnosed with near drowning from swimming a considerable distance as well as possible memory loss. The only clue to his identity is a tattoo that he sports on his left ankle. Meanwhile, a girl goes missing in the prefecture. Her disappearance is suspected to be connected to the serial murders of five girls in the past six months. As detectives Shibata Toshiya and Noma Kenta from the prefectural police and journalist Shintani Emi pursue this latest case, the girl is finally found. It turns out that the place where she was discovered is remarkably similar to the scenery that Hemingway had drawn. When this drawing is also posted on social media, people wonder if he has a prophetic ability. Emi hopes to interview him while Shibata suspects his involvement in the case. As Hemingway helps resolve a series of inexplicable incidents that happen around him, people start to fanatically believe in his divine power and worship him little by little. Despite the wild enthusiasm of the people, Hemingway himself remains consistent from beginning to end. People are the ones who pounce on his words, read his expressions and try to infer his identity. Who is Hemingway and what is the truth regarding the series of incidents?

Characters
Saito Takumi as Hemingway
An unidentified man who was washed ashore and discovered by a group of three high school girls. He becomes the man of the moment after they post a video they had recorded of him on social media. His popularity skyrockets due to the words “Winner Take Nothing” he muttered when he was found. Because he has lost his memory, he hopes someone who knows him will show up as a result of the attention he has attracted. He seems to possess a prophetic ability to steer people towards resolving incidents that are causing a sensation in society. His chiseled features, air of mystery and incredible ability goes viral on social media. People gradually start to worship him … …

Shiraishi Mai as Shintani Emi
A journalist who has seen the country’s underbelly through her work. Contrary to her beautiful looks, she is a go-getter who has even exposed police scandals. When a girl goes missing, she suspects that it is related to the serial murder of five girls in six months and learns about Hemingway’s existence while covering the case. Aiming for a scoop, she initially requests for an interview with the intention of revealing the mysterious Hemingway’s true nature but she gradually grows fascinated with his incredible ability.

Funakoshi Eiichiro as Kunihara Eiichi
A psychiatrist at Niigata Medical University Hospital and the doctor in charge of Hemingway. He tells Hemingway, who is suffering from memory loss, to jot down anything that comes to mind. This makes Hemingway’s clairvoyant ability known to the world.

Lily Franky as Fukami Ryunosuke
The mild and amiable chief priest of Unkoji. Detectives Shibata Toshiya and Noma Kenta come to question him about the disappearance of the girl at the shopping mall as it is close to the temple, but … …

Nomaguchi Toru as Rosen Kishimoto
He presides over Shiawase no Kane no Ie, a non-profit organisation which takes care of people who are in need due to medical or financial reasons. One day, he suddenly shows up in front of a hospitalised Hemingway and becomes his guarantor. An enigmatic man who always wears a gentle smile.

Namase Katsuhisa as Shibata Toshiya
A detective with Niigata Prefectural Police’s First Investigation Division. He has been busy day and night over the case of the missing girl. He suspects Hemingway’s involvement in her disappearance and keeps an eye on his movements. It seems that he experienced some painful events in the past … …

This blog contains information and musings on current and upcoming Japanese dramas but is not intended to be comprehensive.
View all posts by jadefrost →
This entry was posted in Summer 2021 Dramas, TV Asahi and tagged Hyouchakusha, Lily Franky, Namase Katsuhisa. Bookmark the permalink.